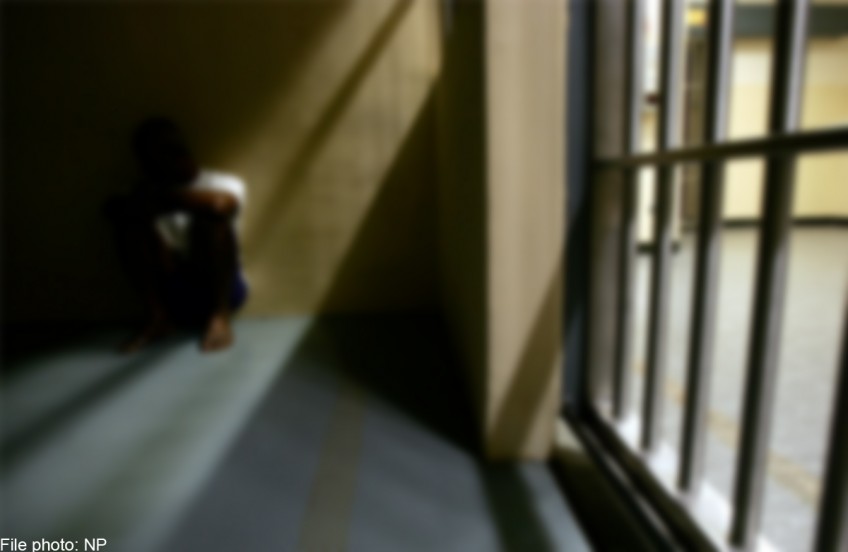 The 22-year-old man becomes angry when his Malaysian girlfriend wants to leave his flat.

He pushes her down onto a bed, sits on her stomach and pins her hands down.

He then presses a pillow over her mouth to suffocate her before attempting to strangle her with his hand.

The man thinks she is dead when she becomes motionless.

He decides to get rid of her body by stuffing it into a suitcase, but fails to do so after two attempts.

He decides to die with the 23-year-old married woman when he is unable to carry her out of his flat.

When he realises she is still alive, he gets a bottle of air freshener concentrate and squeezes some into her mouth, causing her to vomit on the floor.

He removes the woman's shirt after noticing that it is stained with vomit.

But he becomes sexually aroused while undressing her and rapes her.

She does not resist or put up a struggle as she is in a semi-conscious state.

Still determined to end both their lives, the man takes a utility knife and uses it to cut the woman's right wrist. He also cuts her stomach.

Following this, he tries to commit suicide by cutting his own wrists.

He also drinks some of the air freshener liquid and swallows some prescription tablets used to treat fever.

Despite all this...She still survives

They fell in love and became a couple less than a month after meeting in Malaysia.

But the relationship soured and he flew into a rage when the 23-year-old Malaysian sales assistant, a married woman and a mother of one, tried to leave his home about seven months later.

The Singaporean man, who is now 24, attacked, raped and poisoned his ex-girlfriend in his family flat in the western part of Singapore on June 24, 2013.

The man, whom we are not naming to protect the woman's identity, was jailed yesterday for seven years and ordered to receive six strokes of the cane after pleading guilty to one count each of rape and causing hurt by using a poisonous substance.

Three other charges - two of assault and one of attempted suicide - were taken into consideration during sentencing.

The man first met the woman sometime in October 2012 when she was working in a Johor Baru shopping mall.

The pair exchanged text messages and became a couple later that month.

But the woman's husband found out about the affair and this took a toll on their marriage.

Deputy Public Prosecutor (DPP) David Khoo said: "Around this period, (she) began to enter Singapore more frequently to meet (the man) and would even stay overnight at (his flat).

"Soon after, (she) decided to leave her matrimonial home in Malaysia and move to Singapore to be with (the man)."

They shared a room in his flat and they had regular sex between November 2012 and early June 2013. The court heard that the man's parents, his sister and her boyfriend also lived in the same unit.

When the relationship soured, the woman moved out on June 9, 2013, and returned to Johor Baru to reconcile with her husband.

But the Singaporean man refused to give up on the relationship and continued calling her, asking to meet up. He told her 12 days later that if she refused to meet him, he would go to Malaysia to look for her.

She agreed to meet up with him as she did not want him to cause trouble.

On June 22, the woman left her home for Singapore without telling her spouse.

She stayed with the man for three days.

But the court heard that by the end of the next day, she made it clear to him that she no longer wanted to have sex with him and he acknowledged this.

While in his bedroom on June 24, she told the man she wanted to go home as her sister was looking for her.

He refused to let her leave and a quarrel broke out. The couple were alone in the flat.

Enraged, the man pushed her onto a bed, sat on her stomach and pinned her hands down.

DPP Khoo said: "(He) then pressed a pillow over (her) mouth to suffocate her and used his hand to strangle her neck with the intention of wanting (her) to feel the 'pain' that he had been feeling since they ended their relationship."

The woman tried to fight him off but lost consciousness.

When he noticed this, he tried to revive her by blowing air into her mouth and calling out her name.

Panicking, he thought she was dead and phoned his friends to ask for their help in taking her to a secluded place to escape the police.

After that, he retrieved two suitcases from another room and tried to stuff her into them. But she could not fit into either one. So he carried her back to the bed.

He then decided that they should die together as he could not take her out of the flat.

Looking around the room, he grabbed a bottle of concentrated air freshener and squeezed some of its contents into her mouth.

This caused her to vomit on the floor.

The woman then lay back on the bed as she had no strength to escape.

DPP Khoo said that the liquid contained thymol. When consumed, the substance could cause gastrointestinal tract burns, convulsions, seizures and even coma.

Noticing that the woman's shirt was stained with vomit, the man decided to change her dirty clothes into clean ones.

But he became sexually aroused while undressing her. He slipped on a condom and raped the woman, who was semi-conscious.

He was still intent on ending both their lives after sexually assaulting her.

He took out a utility knife from a multi-purpose toolkit in his bedside cabinet and used it to cut her right wrist and stomach.

After that, he lay down beside her, downed some of the air freshener liquid and swallowed some prescription tablets used to treat fever, in an attempt to commit suicide.

She asked him to allow her to go home and he agreed.

The doorbell rang around this time. The man opened the door and saw his friends, whom he had earlier phoned, standing outside.

He left the flat with them and the woman did likewise on her own soon afterwards.

She phoned her sister, who picked her up and they went back to Johor Baru.

She returned to Singapore the next day and made a police report.

On June 26, 2013, she had a medical examination at KK Women's and Children's Hospital where she discovered she was pregnant.

The New Paper understands that she later delivered the child, though the paternity of the baby remains unknown.

In their submissions, the prosecution said it could not be disputed that the rape victim went through an "extremely traumatic and harrowing experience".

DPP Khoo also said the rapist was examined at the Institute of Mental Health (IMH) and found to be suffering from adjustment disorder.

He said: "Despite the above diagnosis, it is highlighted that (his) IMH report clearly states that he was not of unsound mind...when the...act of rape was carried out."

In his mitigation, the man's lawyer, Mr Lee Cheong Hoh, told the court that his client's mental disorder could make him prone to violence.

The lawyer also stressed that the man is remorseful.

Before handing out the sentence, Justice Tay said he took into account that the man was 22 when he committed the offence. He also noted the previous sexual relations the man had with his ex-girlfriend before the relationship went sour.

But the judge noted the aggravating factors of the case.

The man had committed "a string of offences in a short space of time", said Justice Tay, who sentenced him to seven years' jail and six strokes of the cane.

This article was first published on Mar 17, 2015.
Get The New Paper for more stories.