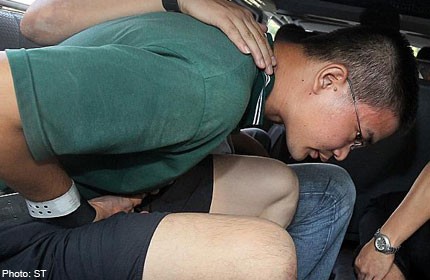 SINGAPORE - The couple were trained in Chinese martial arts, which they often used against each other whenever tempers flared.

Their last domestic scuffle took a tragic turn when the wife died.

Lee Show Fui, 34, was jailed on Friday for five years after pleading guilty to one count of culpable homicide not amounting to murder.

Lee, who has been suffering from schizophrenia since 2007, lost his job as an administrative assistant for a nutrition company a week before the fatal incident.

But he did not tell his wife, said Deputy Public Prosecutor (DPP) Eunice Ng. When he overslept on Aug 31, Madam Tang, thinking he would be late for work, pulled his ear to wake him up and scolded him.

When Lee played a computer game instead, she slapped him on the right cheek, causing him to lose the game.

He retaliated by punching her in the abdomen and they started fighting.

Lee left the flat at 9.14am, pretending to go to work. But he soon went back to confront Madam Tang for having "bullied him" earlier, said DPP Ng.

Another violent fight broke out and Madam Tang, a coffee shop assistant, was killed.

The post-mortem on Sept 1 revealed that she had suffered 62 injuries and she died due to massive abdominal haemorrhage from traumatic injuries to her left kidney.

Before sentencing Lee, Justice Woo said: "No one is entitled to think he can retaliate with violence just because (his) wife started an altercation."