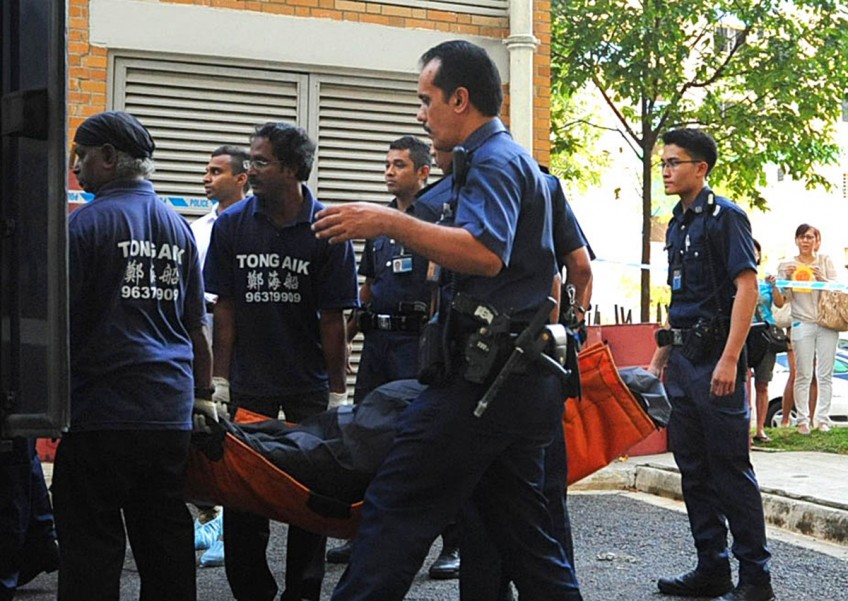 They hated each other's guts.

Char Chin Fah complained to his children that his daughter-in-law often disrespected him. She nagged at him, called him by his full name - which he found very disrespectful - and forbade him from putting his laundry together with the rest of the family's.

Madam Ong Guat Leng, on the other hand, was annoyed by his socially inappropriate habits, such as leaving dirty socks on the dining table and leaving the toilet door open while urinating.

Their acrimonious relationship culminated into bloody carnage on Aug 21, 2014, when Char, then 80, stabbed his daughter-in-law, Madam Ong, 54, to death even as she begged for forgiveness.

After the housewife collapsed, he left the kitchen knife with a 20.4cm-long blade embedded in her chest.

He had planned to commit suicide after that but was convinced by his children to turn himself in to the police.

Yesterday, Char, 82, was jailed for eight years for one count of culpable homicide not amounting to murder.

An Institute of Mental Health (IMH) psychiatrist diagnosed him to be suffering from acute paranoid reaction, which impaired his mental responsibility, though he was of sound mind at the time of the attack.

Court papers said Char lived with his eldest son, Mr Char Yeng Kong, 52, who was married to Madam Ong. The household included their son, his girlfriend and Madam Ong's sister.

Char slept on a bed in the living room, with his living space separated by a curtain.

Investigations showed that Madam Ong was on medication for an anxiety disorder, which caused her to nag and repeat herself when she felt agitated.

Char would leave the flat in Block 440, Tampines Street 43, early in the morning and return only late at night to minimise contact with Madam Ong.

On Aug 20, 2014, Char had a heated argument with his son and daughter-in-law, who were unhappy that he had not washed the curtains used to separate his living space.

Char felt angry and betrayed that his son had not spoken up for him when Madam Ong berated him and decided to kill her.

The next morning, he had breakfast at a nearby coffee shop and wrote a "suicide note" to his daughter, Madam Jenny Char, saying that he had done "something big" and left instructions for her to settle his personal matters. He also drank a bottle of stout to "gather more courage" for what he was about to do.

After the rest of the family left the flat, leaving Madam Ong sleeping alone at home, Char went home and picked out the sharpest knife in the kitchen. He tucked it between his belt and shorts, and went into Madam Ong's room.

She woke up and Char attacked her immediately.

He confessed that he grabbed her by the hair and banged her head against the wall three to four times.

When she managed to break free and ran to another room, he chased her and stopped her from closing the door.

Throughout the attack, Madam Ong begged for forgiveness but Char decided she should not "be left off easily" and stabbed her in the chest four times with the knife.

Having learnt where the heart is situated on the human body from watching a documentary earlier, Char aimed the final blow at the left side of her chest so the knife would penetrate her heart.

Madam Ong collapsed face first to the floor and did not make any more noise.

Char left the knife in her body and went to wash up at the kitchen sink.

He then called his daughter and confessed what he had done before going to her place.

He met her and his younger son, Mr Char Yeng Keang, who understood that his father had wanted to commit suicide to avoid disgracing his children and grandchildren.

Char's children dissuaded him from doing so and his son later drove him to the Bedok Police Division to surrender himself.

Officers found Madam Ong lying face-down in a pool of blood with blood spatters all over her Tampines flat.

An autopsy found four stab wounds in her chest area - two of which punctured a lung and her heart - as well as fractures on her skull and bruises, abrasions and swellings on her face and body.

Dr Stephen Phang of the IMH said in his psychiatric report that Char's mental condition caused him to easily develop paranoid and abnormal suspicions about others towards him, making him a difficult person to live with.

He also said there was a significant risk that Char would again develop interpersonal conflict with his family members should he live with them.

For culpable homicide with intention to cause death, Char could have been jailed for life or up to 20 years in jail with a possible fine or caning.

Attack had been highly planned

He had killed his daughter-in-law, Madam Ong Guat Leng, in a cruel manner, Deputy Public Prosecutor (DPP) Mohamed Faizal said in his submissions for sentencing yesterday.

He said there was a high level of planning and premeditation by Char Chin Fah, who even drank alcohol to muster the necessary Dutch courage to carry out the act.

DPP Faizal pointed out that Char was at significant risk of reacting in a similar manner to his family members even though psychiatrist Stephen Phang had said in his report that Char's "perceived villainess" appeared to have been eliminated.

"Innocent members of the public and his remaining family members ought to be fully protected from a similar episode of mindless violence by the offender," DPP Faizal said.

Defence counsel Ramesh Tiwary, who was engaged by Char's children, said in mitigation that his client lived with Madam Ong's family because his daughter and younger son had space constraints.

Madam Ong and Char began arguing a year after he moved in and she would berate him for living there for free, added Mr Tiwary.

He also said that Char felt insulted and belittled by Madam Ong, and felt that his son, Mr Char Yeng Kong, did not stop his wife.

Char, 82, addressed the court and pleaded for leniency on account of his poor health, after having undergone two surgeries since his arrest.

During sentencing, Justice Woo Bih Li said: "This is a very serious offence, which will ordinarily (lead to) a long-term imprisonment, especially since you lacked insight into your condition.

"The only reason why I've experienced some hesitation of a long-term imprisonment is your advanced age."

Justice Woo backdated the eight-year sentence to Aug 22, 2014, when Char was first remanded.

Dad has tantrums but we've no issues

The housewife spoke to reporters after the 82-year-old was sentenced to eight years' jail for one count of culpable homicide not amounting to murder yesterday.

Madam Char, who was at the hearing with other family members, said: "My dad has his tantrums. But old people are like that. He has his habits and character, but he just wants people to show him respect. We've not had issues with him."

She added that their family members had been visiting Char since he was remanded in August 2014.

"We take turns," said Madam Char, referring to her brother, Mr Char Yeng Keang, and herself.

She added that they had not been in contact with their other brother, Mr Char Yeng Kong, and his in-laws.

Madam Char said her father had undergone two bouts of surgery - one for a urinary tract problem and the other to remove a tumour on his ear - since his arrest.

The family has made arrangements for Char to live with her after his release, added Madam Char.

This article was first published on April 26, 2016.
Get The New Paper for more stories.