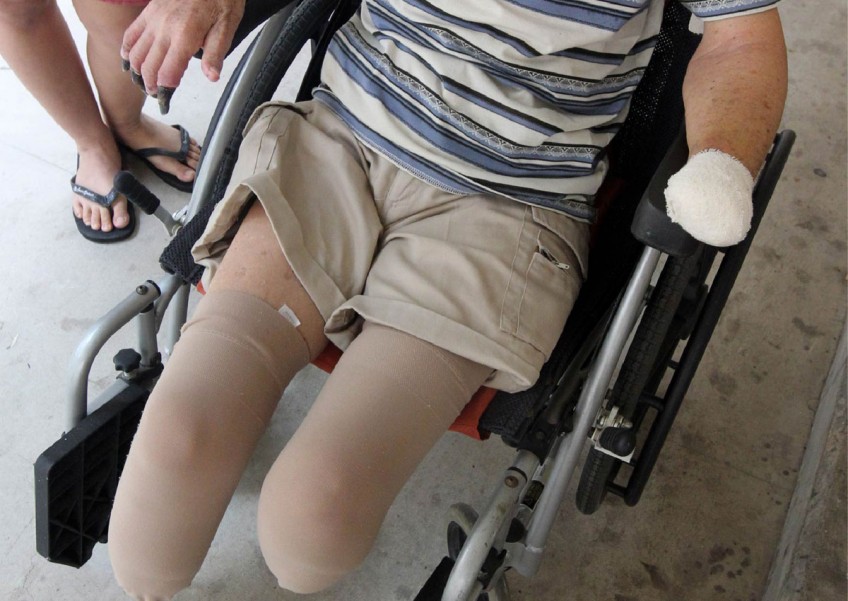 The bacteria infection caused Mr Chew's limbs to turn black. Doctors cut off his left hand and legs, to save his life.
Wanbao

A gardener has had his two legs and left hand amputated after suffering from bacteria infection, which caused his limbs to turn black and put his life in danger if they were not quickly removed.

The 66-year-old man, who wants to be identified only by his surname Chew, has also been told by doctors that he would lose the fingertips of his right hand, which have turned black, Chinese evening daily Lianhe Wanbao reported yesterday.

Mr Chew's case began some two months before the widely reported one of technician Tan Whee Boon, whose hands and legs were cut off last month, after they turned gangrenous due to medical complications.

Three types of bacteria were found in Mr Tan's body, and one was Group B Streptococcus (GBS), which may cause infections of the skin, joints, heart and brain.

Mr Tan, 50, had eaten raw fish just before his limbs turned black, and the Ministry of Health said there was a possible link between raw fish consumption and GBS infection.

Mr Chew told Wanbao that he has been hospitalised since mid-June when he suddenly experienced great pain in his stomach, a bout of vomiting and weakness in the limbs.

He was at home and had just eaten a packet of rice, which he had bought.

"The distress came after 9pm, and my limbs began to swell. Six hours later, I was lying unconscious in an intensive care ward," Mr Chew said.

He was told by doctors the following day that he was infected by bacteria and his left leg had to be amputated immediately. His right leg was amputated two days later.

The last amputation, which removed his left hand, took place early this month.

Mr Chew's case differs from Mr Tan's in that he had not eaten raw fish before he suffered the same symptoms, reported Wanbao.

Doctors had also not explained to Mr Chew the exact cause of his complications, much to his chagrin, said the newspaper.

A family clinic doctor, Mark Low, told Wanbao that Mr Chew could also have been infected by GBS, as the bacteria is found not only in raw fish but practically anywhere.

So far it has not been determined why the bacteria infection has been rampant, said Dr Low, adding that he does not rule out mutation.

GBS could block blood flow and cause limbs to turn black, even in people who are not in the more vulnerable group, which includes diabetic patients and smokers, said the doctor.