Man shot dead by cops after he opened fire at them 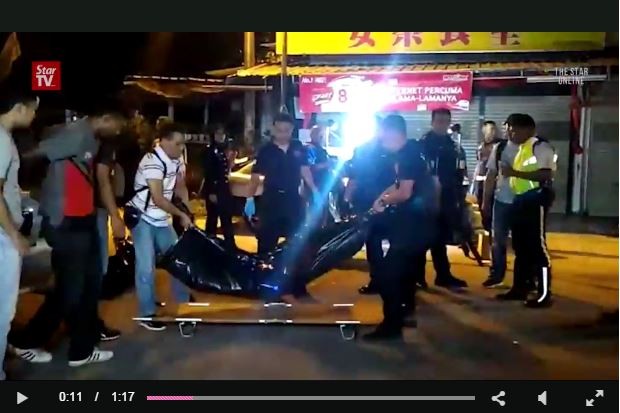 GEORGE TOWN - After killing three members of his family and another man, a drug addict drove to Bukit Mertajam, dumped his getaway vehicle and then came back to the island.

He borrowed a car from a poultry seller and then proceeded to have a meal at a hawker stall at the famous Air Itam market and was coolly walking around the foothills of the Air Itam Dam. That spelt the end for Chung Chun Wah, 32.

A tip-off led to police on patrol spotting him inside a car in front of a souvenir shop near the Kek Lok Si temple at around 7pm yesterday.

When policemen approached him, he fired several shots at them. The policemen returned fire, killing Chung on the spot.

The 9mm semi-automatic pistol which was believed to have been used to kill his family members was found on the body along with an identification card.

He was earlier believed to have fled to Bukit Mertajam after shooting his mother Tan Saw Sim, 55, brother Chung Wah Thong, 28, his two-year-old nephew Ayden and Tan's boyfriend Toh Hock Choon, 50, with the semi-automatic pistol at around 2.45am on Wednesday.

It is learnt that he later went back to the island with the help of a friend and hid near the Kek Lok Si temple.

A resident in the area, KG Lee, said the man had gone to his uncle's house to borrow a car.

"Chung's uncle stays in Kampung Pisang near here and sells poultry in the Air Itam market. After the man left, the family alerted police," he said.

A cyclist, Jeff, said he was nearby when the shooting happened.

"I heard more than 10 gunshots. I thought it was the sound of firecrackers but an elderly man told me to move away. That's when I saw the policemen and realised there was shooting going on."

The hilly road near the dam is used by many cyclists for recreation.

A large crowd of curious bystanders and traders gathered near the market to try and get a glimpse of the action after the shooting.

The roads leading to the Kek Lok Si temple were cordoned off and most of the businesses in the market, famed for its hawker food, were closed down.

The durian stalls which are usually packed in the evenings were near empty.

Penang CID chief Senior Asst Comm Datuk Razarudin Husain said they had received a tip-off from the public about the man in a gold-coloured Proton Wira behaving suspiciously.

"Coincidentally, our personnel from the north-east district crime division and Bukit Aman were in the area helping with investigations into the Batu Maung shooting case. That's when they closed in on the killer."