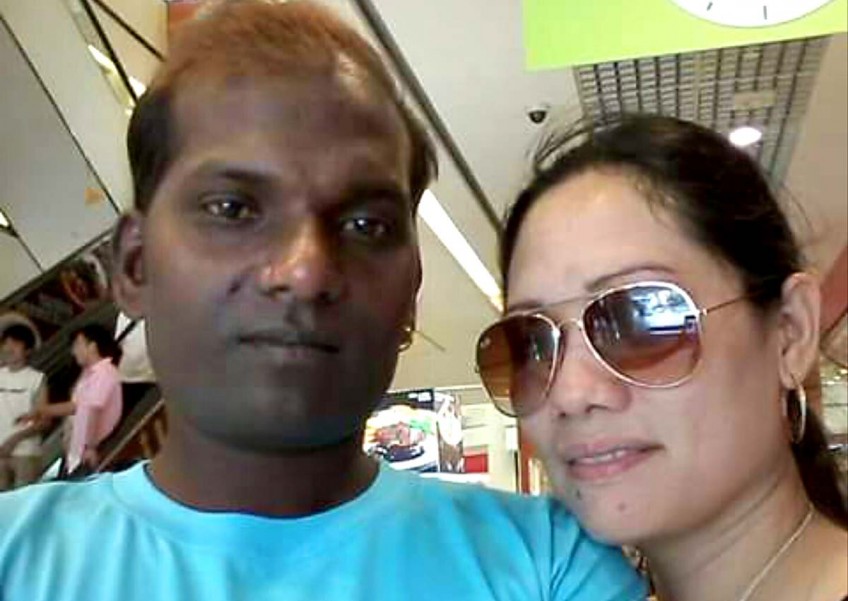 Ms Allen Remedios is pictured here with the man the police are looking for.
Jose Mari Camacho

Love hurts but no one said it had to be cut-throat.

A maid was slashed on Sunday by a man, who is alleged to be her former boyfriend, in what is believed to be a crime of passion.

Ms Allen Remedios, 38, was returning to her employer's home at Block 311, Tampines Street 33, in the evening when she was attacked on the first storey.

The man stopped her, took out a paper cutter and slashed her throat, wrist and palm.

After he fled, she stumbled up the stairs to the second-storey flat, leaving a trail of blood.

Another maid working for the same employer said she heard the door bell ring at about 6.30pm and was horrified to see Ms Remedios drenched in blood when she opened the door.

"She was standing there with blood all over her.

"The cut on her left hand was very deep, and blood was gushing out of her throat," the maid, who wanted to be known only as Ms Rose, 25, told The New Paper yesterday.

"She said, 'Sister, call boss', and I shouted for our employer, who came running out."

By the time their employer, Mr Jose Mari Camacho, 40, rushed out of a room, Ms Remedios had slumped to the floor.

The planning manager said: "I was shocked. I immediately grabbed a towel and told Rose to apply pressure on the injuries and called the police.

"I then ran out of the flat to find out who had done this to her."

When he could not find the attacker, he went back to attend to Ms Remedios.

"She was still conscious and bleeding heavily. It was a very deep cut and I could see her trachea (windpipe) coming out from her throat, where blood was spurting out of," Mr Camacho said.

"There were also deep cuts on her wrist and palm. I could see her bones and ligaments. Her thumb and finger were hanging just by the skin."

An ambulance and the police arrived within minutes and Ms Remedios was taken to Changi General Hospital.

A police spokesman said yesterday they received a call at about 6.30pm and their officers later established that a case of voluntarily causing hurt with dangerous means had occurred.

Investigations are continuing. TNP understands that a bloodied paper cutter about 15cm long was found in the vicinity of the block and the alleged attacker is still at large.

In an update yesterday evening, the police said they were looking for a man to assist with investigations into the case.

The picture of the man provided by the police is a cropped version of a man pictured with Ms Remedios.

Anyone with information can call the police hotline at 1800-255-0000 or submit information online at www.police.gov.sg/CrimeStopper. All information will be kept strictly confidential.

Ms Rose said Ms Remedios broke up with her boyfriend, a construction worker, about three months ago and he had been seen loitering at the block for about an hour every Sunday since then.

"She no longer kept in contact with him after they broke up but he was always hanging around the block on Sundays," she said.

Mr Camacho said Ms Remedios is a good employee and he did not expect something like this to happen. (See report on right.) He accompanied her in the ambulance to the hospital and said that she lost so much blood that the doctors had to do a transfusion.

"She also underwent an operation and is now in stable condition.

"She still can't talk so I'm not sure what the whole story is.

"But the attack was definitely planned."

He said that he took emergency leave yesterday as he was worried for the safety of his family and employees.

"The attacker is a dangerous man who obviously had the intention to kill, not just inflict hurt," he said.

"I hope he is caught soon and brought to justice.

Fellow maid so rattled, she won't go out

Ms Allen Remedios' colleague is so traumatised by the attack that she refuses to leave the flat.

"I have an upcoming day off next Sunday but I don't want to take it," said the maid, who wanted to be known only as Ms Rose. "I'm scared to go out because the man is still not caught."

She has been working for the family for less than a year and is now afraid to even open the door.

He said Ms Remedios, the victim, has been working for the family for about two years and was a good employee.

She was so close to the family that she called him "elder brother" in Tagalog.

He recalled how she was supposed to go back to the Philippines last Christmas to spend time with her two daughters, but he asked her to bring them to Singapore instead for a holiday.

"I paid for their tickets and they spent Christmas together with my family," said the father of three.

"She is a hard-working and good worker. We've informed her daughters of what happened and my wife wanted to bring them over, but we're still not sure if that is a good idea."

He said that he was not against her having a boyfriend.

"She's a worker, not a slave. She's separated and has a right to be in a relationship," he said.

"We are all human. But I reminded her of the laws in Singapore and that she should be mindful of them.

"No matter what, she definitely did not deserve to be slashed like that."

This article was first published on August 25, 2015.
Get The New Paper for more stories.