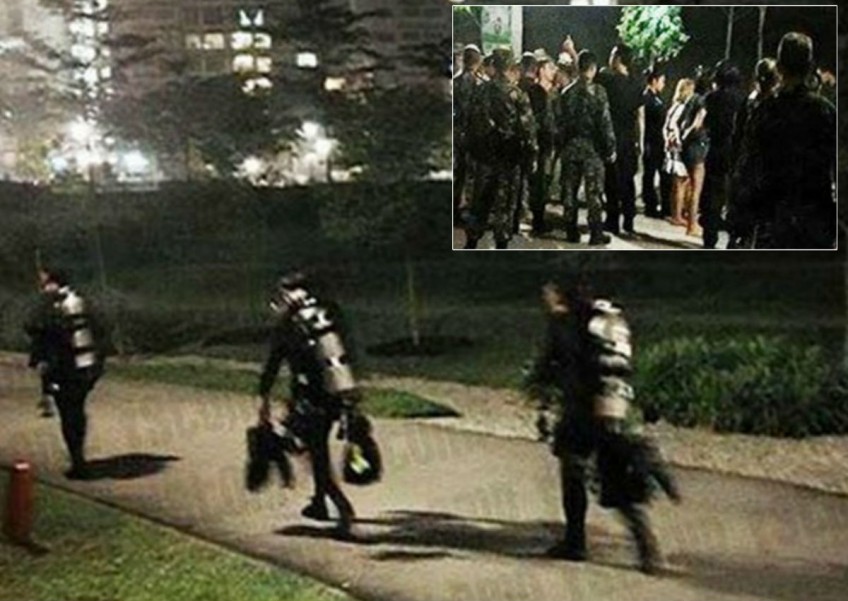 A 25-year-old man drowned in Punggol Waterway on Tuesday night, while police were conducting a raid in the vicinity.

Residents of flats at the nearby Punggol Parcvista development said they heard shouting and saw flashlights being shone on the hills overlooking the Punggol Waterway Park as people were chased out from the forested area.

Police said the man was found swimming in the waters at around 10pm and went under before officers could reach him.

A Singapore Civil Defence Force (SCDF) spokesman said the body was recovered from the water at around 11.30pm and pronounced dead on site by paramedics.

The incident has been classified as an unnatural death and investigations are still ongoing.

It is not known whether his death was related to the operations being conducted by the police.

Engineer Andy Bai, 32, was returning home from work when he saw the commotion and decided to check it out.

Although Mr Bai did not witness the drowning, he saw police officers and men in army uniform, believed to be Gurkhas, crowded around the water's edge on a stretch of the park near Sentul Crescent.

Divers and other officers from the SCDF could also be seen searching the waterway.

Ms Eilene Poh, 28, who resides in Block 313C Sumang Link overlooking the park, saw the incident from her flat and went down to see what was going on.

"I saw men and women sitting on the slope of the hill, with their hands restrained behind them," said Ms Poh, adding that they appeared to be foreigners.

This is believed to be the second death in Punggol Waterway Park in less than a year, after the body of a 46-year-old man was found dead in a forested area near Punggol Road in February.

This article was first published on Nov 26, 2015.
Get a copy of The Straits Times or go to straitstimes.com for more stories.