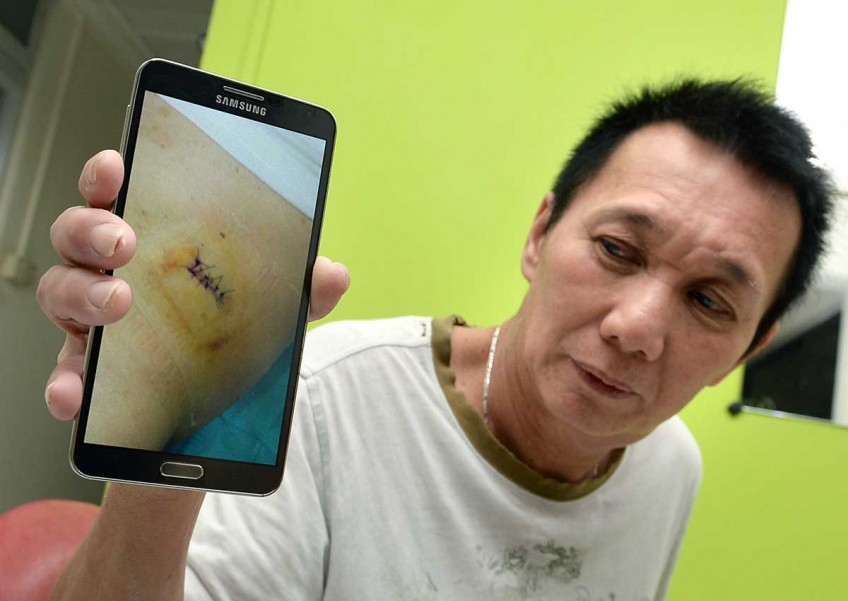 It was his birthday and he had ordered food from a coffee shop to take home to celebrate with his family.

But the celebratory mood soon turned sour after Mr Yue Tuck Choy got into a dispute for telling off another man who was smoking in the coffee shop, then taking a photograph of him in the act.

The night ended with the man stabbing Mr Yue's back with a 31cm-long kitchen knife, narrowly missing his right kidney.

Yesterday, the attacker, Tay Thiam Huat, 59, an odd job worker, was jailed for eight months for voluntarily causing hurt to Mr Yue on May 25 last year.

Mr Yue, 59, a mail delivery storekeeper, told The New Paper at his Choa Chu Kang flat yesterday evening that he and a friend were at the Block 475, Choa Chu Kang Avenue 3 coffee shop at about 8.30pm that day.

"I had ordered food, including crabs, to take away and to eat with my family back home. While waiting for the food, we decided to have some beer," he said.

That was when Mr Yue saw Tay smoking at the table beside his, despite the no-smoking signs on display.

"I was annoyed that he was smoking in a non-smoking area. I wanted him to stop," he said.

Mr Yue first tried complaining loudly about Tay's behaviour to his friend, hoping that Tay would get the hint.

When that failed, he used his mobile phone to take a picture of Tay smoking.

"I told him (Tay) I was going to show the picture to the police," he said.

Both men got into a heated argument before Tay grabbed Mr Yue's shirt, court papers said.

Mr Yue reacted by pushing Tay to the ground and other patrons rushed over to separate the two men.

Court papers said that Tay then shook Mr Yue's hand as a conciliatory gesture, apologised and left the coffee shop.

Thinking that the matter was over, Mr Yue continued drinking with his friend.

But Tay returned about 15 minutes later armed with a 31cm-long kitchen knife wrapped in newspapers.

Mr Yue said: "I didn't think he would come back and attack me. All I felt was a rush of wind from behind me and then a sudden, sharp pain in my back.

"I thought I was going to die."

Tay fled the coffee shop and headed for the nearby HDB blocks.

Mr Yue and his friend gave chase, but stopped after a short distance as Mr Yue was feeling weak from his injuries.

He phoned his son, Mr Jonathan Yue, 28, an ambulance paramedic, and told him what had happened.

"But I said I was okay to go to the hospital myself and told him to collect the food from the coffee shop," he said.

The younger Mr Yue told TNP that he had allowed his father to go to the hospital alone after assessing the wound to be not life threatening.

At the National University Hospital, Mr Yue had stitches for the open wound on his back, court papers said.

Tay surrendered at the Choa Chu Kang Neighbourhood Police Centre the next day.

Yesterday in court, Tay, who was not represented by a lawyer, said in his mitigation plea that he was regretful of what he did and has apologised to Mr Yue.

District Judge Low Wee Ping said in sentencing that it was fortunate that Mr Yue managed to recover from his injury.

But the incident left Mr Yue with physical and emotional scars.

"Whenever I hear footsteps behind me now, I get frightened and turn to check if it's someone coming to attack me," he told TNP.

He also said he would no longer do such acts of vigilantism.

Mr Yue said he has forgiven his attacker.

"His friend arranged a meet-up after the incident where he apologised to me. I've since let it go," he said.