Ariel Pang
AsiaOne
W.T.M. Why This Matters
More dirty secrets have come to light of the man who publicly criticised a traffic policeman who died while on duty last week. Thomas Chua was not only arrested for stealing from Mustafa, he has also been charged for multiple offences.

Singapore's most hated person at the moment - Thomas Chua Poh Heng - has a slew of dirty secrets, including allegedly threatening to hire people to kill his girlfriend's ex-husband, according to a Chinese media report.

It was reported previously that Chua, who criticised a traffic policeman who died while on duty last week, was arrested for stealing from Mustafa Centre along Syed Alwi Road on Sunday (Jun 4). He allegedly made off with a bottle of perfume worth $98.

Prior to his arrest, three other police reports had been lodged against him since Jan.

However, his dubious track record does not stop there.

According to Lianhe Wanbao, Chua has been charged with over 10 traffic offences since 2000, including dangerous driving and speeding on the roads. 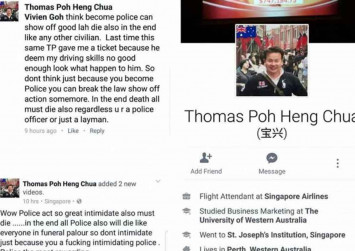 Now, his girlfriend's ex-husband has stepped forward to say that Chua threatened to "hire people from Geylang to kill (him)".

The ex-husband, 43-year-old Mr Chia, told Lianhe Wanbao that although he had divorced his wife - Chua's current girlfriend of two years - they still resided in the same rental flat due to leasing problems.

On May 17 this year, Chua and his girlfriend had an argument at around 1am in the morning.

Chua then texted his girlfriend to say that he was going to look for people in Geylang to kill Mr Chia.

Despite having never gotten into a dispute with Chua before, Mr Chia said it was not the first time he had been harassed by Chua. Last August, Chua posted Mr Chia's photos and home address on Facebook, claiming that Mr Chia was wanted by the police for drug offences.

Mr Chia has since filed police reports for both incidents and investigations are undergoing.

That's not all, though.

Chua is also under investigation from the Immigrations and Checkpoints Authority (ICA) on suspicion of crossing customs without producing a passport, reported the evening daily.

He also used two addresses of properties not owned by him as mailing addresses. The homeowners of the properties have found themselves inundated with letters and fines addressed to Chua. 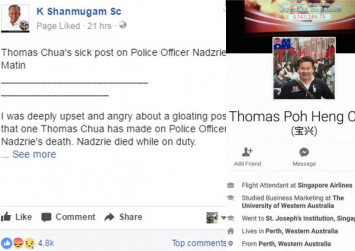 One of them, a private property owner, told Lianhe Wanbao that he had been receiving letters addressed to Chua for over a decade.

The other homeowner, who resides in a HDB flat in Serangoon Central, said she moved into her current home in 2008, but began receiving letters addressed to Chua some time in the last two years.

The owner of the Serangoon flat added that Grab had also sent a letter addressed to Chua. The letter requested Chua to repay his debts, which were likely accumulated from renting a car and not paying up.

Both homeowners have since filed multiple police reports.