The man who criticised a traffic policeman who died while on duty has been arrested, but for offences unrelated to his online posts, said a statement from the Singapore Police Force on Monday (June 5).

According to the police, the 39-year-old man, Thomas Chua Poh Heng, was arrested on June 4 at about 5.37am, for a case of theft from a department store along Syed Alwi Road.

Security officers had detained him outside the store with an unpaid item and handed him over to the police.

In the statement, police also confirmed that Chua had been under investigation for three other police reports lodged against him since January 2017, prior to the theft case.

Police investigations into these cases are still ongoing.

In his post made last week, Chua had gloated over Staff Sergeant Nadzrie Matin's death.

Said Mr Shanmugam in his post on June 3: "I was deeply upset and angry about a gloating post that one Thomas Chua has made on Police Officer Nadzrie's death. Nadzrie died while on duty.

"Thomas was gloating about Nadzrie's death, because Nazdrie had given him a ticket! 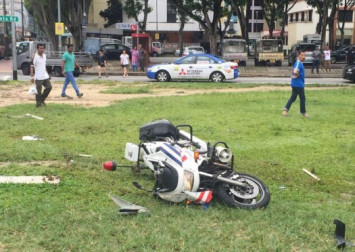 "People like Thomas are sick in the head. No decency or any sense of right and wrong.

"What is a TP officer to do when someone breaks the law? It is because of officers like Nadzrie that the rest of us have safety and security.

"Thomas's comments are an insult to all police officers, and deeply offensive to Nadzrie's family.