The man who drew thousands of followers 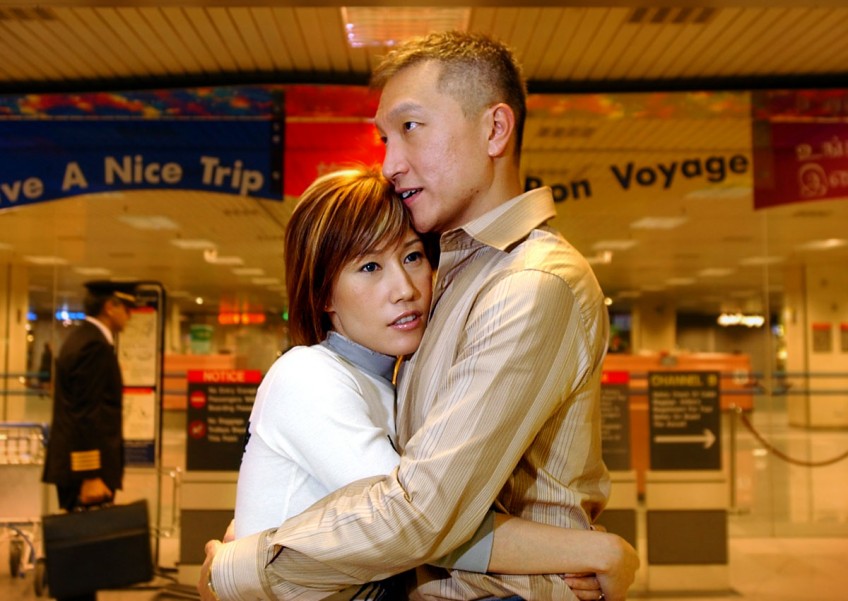 In their younger days: Kong and his pop-singer wife, Ms Ho, sharing a goodbye hug at Changi Airport in this 2003 file photo. At the time, Ms Ho was flying to China to promote her third album.
The New Paper

He is known among City Harvest churchgoers for his charisma, and had preached passionately to a 30,000-strong congregation at the peak of the church's popularity in 2009.

But City Harvest Church (CHC) founder and senior pastor Kong Hee was a man of few words after the verdict of a long-running criminal trial was delivered yesterday. He was found guilty of three charges of criminal breach of trust.

Sitting in the dock next to co-accused John Lam and Sharon Tan, the 51-year-old hung his head low and wore a stoic expression as Presiding Judge See Kee Oon addressed a packed courtroom.

When asked about his feelings as he left the State Courts later, he braved a smile and said: "No, not now."

He was accompanied by his lawyer, Edwin Tong, and his wife, Ho Yeow Sun, who also kept silent.

Since its formation in 1989, CHC has been through its fair share of ups and downs.

Fronted by Kong and Ms Ho, it began with just 20 followers at a single-storey terrace house at 41A Amber Road. That year, Kong had just graduated from the National University of Singapore and had "barely a dollar to his name", as he puts it on CHC's website.

Its focus on Bible studies soon attracted some 200 members in the first year. In 1995, after Kong completed his theology doctorate in the United States, the number of members swelled to 1,000.

The church continued to grow exponentially and by 2009, more than 30,000 youthful and energetic followers would fill its chic $48-million Jurong West premises for services every week.

Over the years, however, Kong had to brush off criticisms about the church's supposedly aggressive evangelism and his sermons, which some in the Christian community had felt were focused on financial blessings.

In an interview with The Straits Times in 2008, he maintained that the church was "merely seeking to present Christianity in a way that is relevant to the people of the 21st century".

When the 140-day trial began, some church members were quick to rally around their embattled leader, while others expressed concern over the church's reputation.