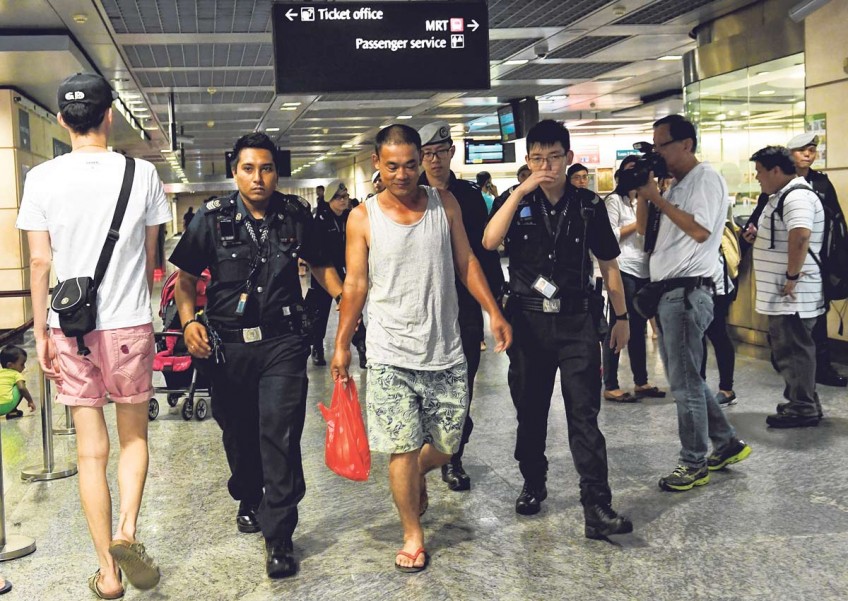 Police have arrested a 39-year-old man for leaving a bag unattended in Hougang MRT station yesterday, causing the station to be closed for an hour.

Police later said the bag was found to contain "only household items".

"Preliminary investigations revealed that the man had intentionally left his bag inside the Hougang MRT station while he ran an errand."

The man was later seen being led by police officers out of the station in handcuffs.

For about an hour, the station was shut down as police were called in to investigate the bag that was left on the station's platform. SBS Transit said the bag was found at about 2.40pm.

Commuters were not allowed into the station and trains in both directions on the North-East Line did not stop at the station "for the safety of all passengers," SBS Transit said.

Those who were in the station were also asked to leave. Commuters were redirected to bus services or other train stations.

The station reopened shortly after 4pm, after the bag was found not to contain anything suspicious.

An elderly woman was injured during the incident. The New Paper understands that she fell on the platform of the station.

When TNP arrived on the scene at 3.30pm, she was being wheeled out by paramedics.

According to the Singapore Civil Defence Force, the woman fell and had cuts on the back of her head.

She also complained of pain on her right elbow and was taken to Tan Tock Seng Hospital.

An affected commuter, Mr Syafiq Ramli, 22, said: "I was on the way to meet my friends but I was shocked to see the station closed like that. No one could enter."

Officers from the Ang Mo Kio Police Division and the Public Transport Security Command, with the assistance of SBS Transit, traced the owner of the bag and he was arrested at the station at about 4.35pm.

The police said it took all security threats seriously, and warned that it would not hesitate to take action against those who intentionally cause public alarm.

"The police would also like to remind the public not to leave personal belongings unattended and to report any suspicious items or behaviour to the MRT staff or the police immediately," it added.

Member of Parliament Melvin Yong, who is a member of the Government Parliamentary Committee on Transport, commended SBS Transit employees for their timely reaction to the situation.

"This is a reminder that... our public transport workers are important eyes on the ground. As first responders, their alertness and quick response are crucial to ensure the safety of commuters," he wrote on Facebook yesterday evening.

This article was first published on April 3, 2017.
Get The New Paper for more stories.