Man who threw himself on car was bank accountant who went bankrupt, says dad

The 35-year-old man who threw himself onto a car along Pasir Ris Farmway 2 on Sunday (Jun 11) was a bankrupt who had lost his job as an accountant at a local bank earlier this year, the man's father, Mr Lim, told Shin Min Daily News in a report on Tuesday (Jun 13).

The man had worked as an accountant at the bank for over ten years after he graduated from university, and drew a salary that was upwards of $10,000. He also dabbled in the stock market on the side, but lost a large sum of money after getting burnt, said Mr Lim.

Stocks that the man invested in crashed in September last year, and he had to declare bankruptcy. Then, in another huge blow, he lost his job early this year, said Mr Lim. He became a delivery driver in March, but quit within three months, added Mr Lim's wife.

Mr Lim, who is in his 70s, said his son had been searching for ways to pick himself up ever since he went bankrupt, and was likely under tremendous amounts of stress as a result. He said his son "behaves normally" usually, but "acts up" when under stress, said Mr Lim, but did not elaborate.

According to Mr Lim, his son said he was going to look at pets when he left the house on Sunday (June 14).

The drunk man was filmed by a car dashboard camera later that day, standing in the middle of Pasir Ris Farmway 2.

When the driver of the vehicle pulled to a stop in front of him, the man ran and jumped onto the stationary car, punched and kicked it a few times, before claiming that he had been injured and demanding compensation from the driver.

The driver of the car, 47-year-old Terry Loo Peng Leong, later uploaded the footage onto Facebook.

The man was subsequently arrested by the police for committing a rash act. 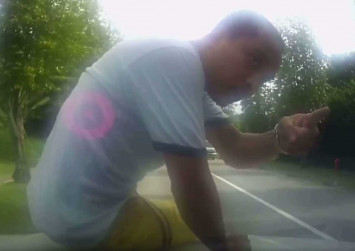 His mother revealed to the Chinese daily that he is currently undergoing examination and treatment at the Institute of Mental Health.

Mr Loo, a vice-president of sales, told Shin Min Daily News that he did not intend to demand compensation from the man. Instead, he hoped that the man would receive the necessary help and assistance.

"We are extremely grateful that the driver is not demanding recompense, but as this incident was brought about from our son's actions, we wish to apologise to (Mr Loo)," Mr Lim said.

According to the Shin Min Daily News, neighbours of the man described him as gracious and polite, and said they were shocked by the news.

A neighbour who lived on the same floor said he initially thought the footage was fake, and could not recognise the man at all.

"I've known him for over ten years, and he's never behaved strangely. Everything appeared normal," he told the paper.