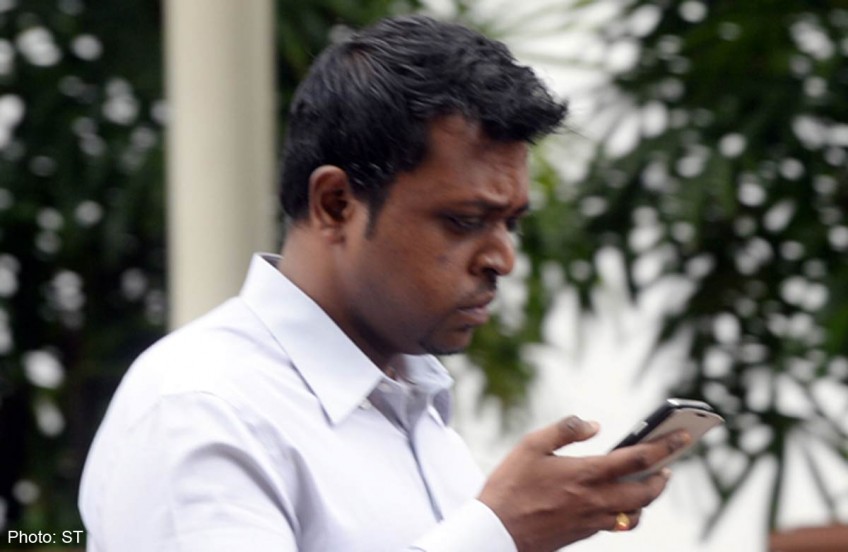 A former bank executive who took nearly 100 upskirt videos of women over 21/2 years was jailed for eight weeks yesterday.

Maha Vignesh Velippan (above), 32, who was with the State Bank of India then, admitted to 19 charges of insulting modesty and one of having 596 obscene films last August. Another 75 charges were considered during sentencing.

The court heard that during lunchtime on June 7, 2011, a 27-year-old business relationship manager was on an escalator in the Standard Chartered Bank building in Battery Road when she felt something brush against her legs.

She turned around and saw Maha Vignesh standing very close to her on the next step. He was holding a paper bag containing his phone, with its camera lens pointing at her.

She asked for his phone and found an upskirt video of herself, then called the police.

Most of the videos were taken near Raffles Place and the women's identities were unknown. The offences took place between 2008 and 2011.

His lawyer, Mr Rajan Supramaniam, said his client, who was working as a sales manager at NTUC Income last year and has since left, suffered from voyeurism and sex addiction and was making good progress in his psychiatric treatment.

"At the time of the offences, he was facing personal problems with his ex-girlfriend and was in a troubled state of mind," he said.

Maha Vignesh could have been jailed for up to one year and/or fined for each charge of insulting modesty.