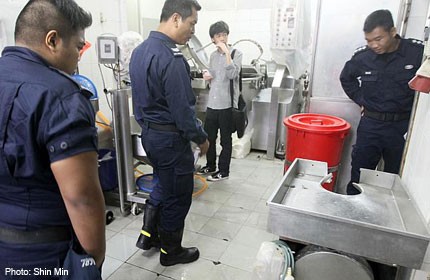 Mr Sun, a food factory worker whose arm was trapped in a meat grinder, was rushed to the hospital, with part of the machine still attached to his arm. Part of the arm had to be amputated.

SINGAPORE - A 28-year-old food factory worker needed to have part of his left arm amputated on Thursday after it got trapped in a meat grinder.

Mr Sun Xiao Bo, a Chinese national, was rushed to the hospital with part of the machine still attached to his wrist.

He was grinding fish to make fishballs at his company, Leong Hin Foods, at Woodlands Loop when the incident happened.

Paramedics from the Singapore Civil Defence Force put him on drips and supplied oxygen to stabilise his condition when they arrived at the scene at about 8.30am. They also monitored his vital signs.

Rescuers from the SCDF's Disaster Assistance and Rescue Team (Dart) later made the decision to remove the grinder, with his arm still stuck in it, from a bigger housing unit as the man was losing a lot of blood, a spokesman said.

Dart officers had to dismantle the grinder into smaller parts using wrenches and spanners.

Mr Sun's arm was removed from the grinder after 20 minutes by specialist doctors, with the help of Dart officers.

He was in stable condition after an operation to amputate part of his arm, a TTSH spokesman said.

Work went on as usual at the fourth-floor factory, but behind closed shutters.

Staff would only say that they could not comment without the permission of their boss, who could not be contacted.