A man was 'kidnapped' by two other men outside a factory in Sungei Kadut as part of a bachelor party prank, prompting an alarmed security guard to call the police.

The incident happened at the Sungei Kadut Industrial Estate on Saturday (Nov 25) at around 12.15pm.

According to Shin Min Daily News, the 'kidanpped' man was a Caucasian engineer working at a factory nearby.

Two other Caucasian men reportedly placed a hood over his head and dragged him into a waiting car.

By the time reporters reached the scene, they found about five to six police officers explaining to a factory security guard that the incident was a prank.

The incident was also witnessed by a worker nearby.

The worker told Shin Min Daily News that the two men had ambushed the unsuspecting 'victim' by the security office of a factory.

Said the worker: "I saw the man walking out the gates of the factory.

"The two other men shouted at him and took him by surprise, quickly placing a black hood over his head."

The two men then attempted to carry the man off, but the latter kept struggling, causing all three to fall on a grass patch beside the road.

Accessing the situation, the two men restrained the victim using a cable tie to bind his hands before carrying him off. 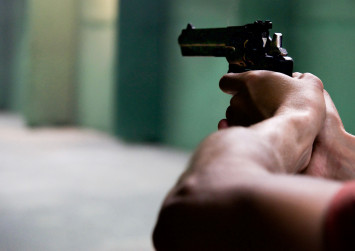 "They attempted to throw the man into the boot of a waiting car, but discovered that he wouldn't fit, so they tossed him into the backseat instead, and drove away.

"I was stunned when I saw the three of them struggling on the ground.

"I didn't know whether to offer help or to call the police."

Due to the realistic acting of the two 'kidnappers', the security guard and worker mistook it to be a real case of kidnapping.

This prompted the guard to call the police immediately after the three men left.