Many don't know psoriasis not contagious 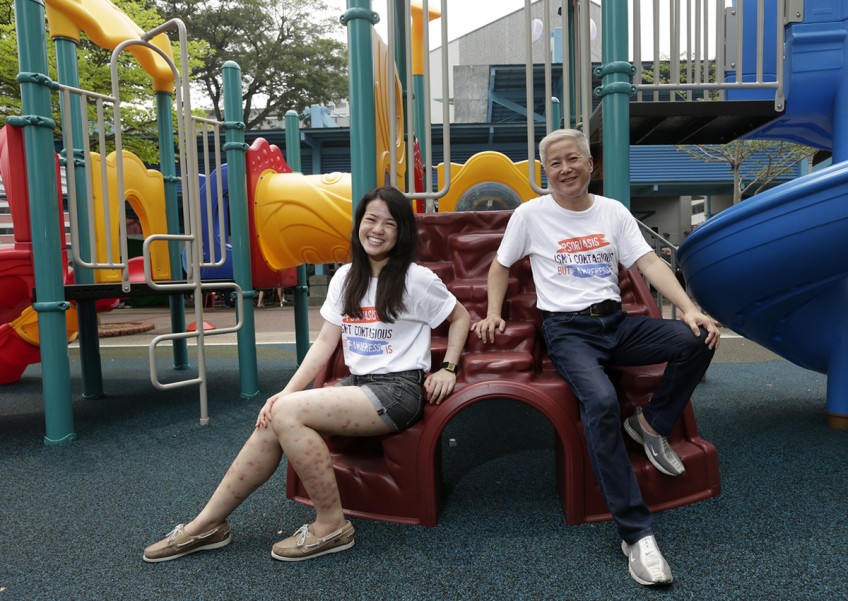 Ms Yvonne Chan, 23, who has psoriasis, has embraced her condition, which left dark patches on her legs. Mr Jerome Yong, 51, had some of his worst outbreaks of psoriasis in his 30s. Now his condition is better and he hopes to create more awareness of the disease.
The Straits Times

It was a novel way of conducting a survey. People with psoriasis, a condition that causes flaking skin, went to train stations and bus stops to ask strangers if they would shake hands with them, or eat food they had prepared.

Another question was whether they would let their children play with others with the condition.

Around half of the 340 respondents replied "No" to these questions, despite the fact that psoriasis is not contagious.

"The survey results show that we've still got a long way to go in raising awareness about the condition," said Dr Colin Theng, president of the Psoriasis Association of Singapore, a non-profit organisation which is embarking on a fresh campaign to raise awareness.

The campaign, launched yesterday ahead of World Psoriasis Day on Thursday, is called "Patient Journey - We are just like you". It included a mini-exhibition of eight patients' stories that was displayed at Ang Mo Kio Central. The campaign will continue online.

Psoriasis is an incurable immune disorder of unknown cause that affects about 1 per cent of Singapore's population, or over 54,000 people. It causes scaly and flaking skin, as well as red, inflamed patches that can cover a person's entire body.

Dr Theng said that in the association's first public perception survey, which was released yesterday, 94 per cent of respondents said they did not understand the disease. More than half also mistakenly said it was contagious.

"People who have psoriasis may be feeling depressed and isolated. By raising awareness of the disease, we can let people know that there is somewhere they can go to for support," he said.

Mr Jerome Yong, 51, a volunteer with the association, had some of his worst outbreaks of psoriasis in his 30s when he was an administration manager. He felt ashamed of the red, scaly patches that would appear on his body and, sometimes, his forehead and ear lobes.

"I wouldn't even dare to look into the mirror," he said. People kept away from him on public transport and he would stay late in his office to avoid crowded trains home.

Now his condition is better and he hopes to create more awareness of the disease, which may be triggered by stress.

Those who have it can undergo phototherapy to treat small areas of the skin. For severe cases, patients can go through biologic treatments to control the disease.

The Ministry of Health has taken steps to recognise psoriasis as a chronic disease, said Minister of State for Health Lam Pin Min at the event yesterday.

It is one of the conditions included in the Chronic Disease Management Programme in June, he added, and patients can use Medisave to pay for part of their outpatient treatment at general practitioner clinics, polyclinics or public hospitals' specialist outpatient clinics.

Ms Yvonne Chan, 23, who has psoriasis, has embraced her condition, which left dark patches on her legs.

"If we cover up all the time, fewer people will know of the condition," said the senior executive in product development. "As long as one more person knows about it, that's a good thing for us."