Men argue, hurl vulgarities and exchange blows on MRT before being separated by commuters 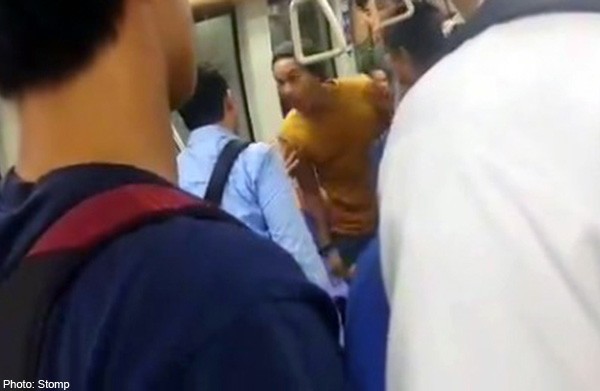 Two men were seen getting into a heated argument on the train, with one demanding that the other get off.

SINGAPORE - In a video clip circulating on social media, two men were seen getting into a heated argument on the North-East MRT line, with one demanding that the other get off.

A clip of the incident was uploaded by Facebook user, Eric.

In the video, a man in a yellow T-shirt and a beanie demanded that a man in a blue shirt get off the train during an argument. It is not clear how the quarrel started.

The wife of the man in the blue shirt can be heard speaking on the phone, reporting the incident to the police.

The man wearing the yellow shirt then hurls vulgarities at the other man, before shoving him.

The man in the blue shirt retaliates and the two get into a scuffle before being separated by other commuters on the train.

The wife can also be heard yelling a vulgarity at the man in the yellow shirt, prompting him to yell more vulgarities at the couple in response.

Post by Eric Cheng.
SUBSCRIBE TO OUR NEWSLETTER
Your daily good stuff - AsiaOne stories delivered straight to your inbox