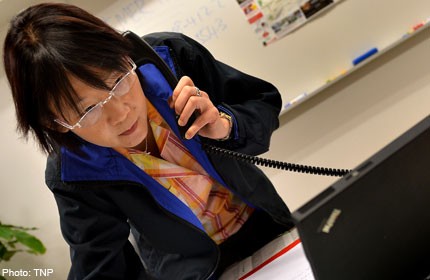 She suffered from 'quake sickness'

SINGAPORE - She was so busy helping Singaporeans in Japan after the 2011 earthquake and tsunami, she forgot to reassure her own family she was safe.

Ms Evadne Chan, an attache formerly stationed with the Singapore Embassy in Tokyo, was relating her experience after the March 11, 2011, natural disaster in Sendai.

"My father sent an e-mail to the ministry looking for his daughter," Ms Chan revealed sheepishly, adding that she managed to contact her sister to assure her that she was "alive and kicking".

But there was much work to be done. Japan had just been rocked by a 9.0 magnitude quake and a devastating tsunami, which killed about 16,000 people.

Ms Chan was primarily responsible for contacting about 40 registered Singaporeans who lived in Miyagi prefecture, about 300km out of Tokyo, to check if they were safe or needed any assistance.

"Reaching them proved to be an enormous challenge as the phone lines were down," said Ms Chan, who has been with the foreign service for 15 years.

She eventually got in touch with about 250 Singaporeans.

The most difficult part of the whole job was trying to convince those near the affected areas to seek refuge elsewhere.

Many were confused because of the mixed information from various avenues about the nuclear radiation threat. Most cooperated and later left the area. But a small group wanted to stay on because of various commitments. She continued to check in on them to ensure their safety.

Because of the hundreds of aftershocks, Ms Chan suffered from "earthquake sickness".

Known in Japanese as jishin-yoi, which literally means "earthquake drunk", it is a medical condition where people feel the ground shaking as though in a quake.

It took months just to arrange a visit.

A Singaporean had been jailed for credit card fraud in Mongolia and the Ministry of Foreign Affairs had just informed the Singapore Embassy in Seoul, South Korea, about it.

The embassy there also handles matters in Mongolia.

First Secretary Eugene Ng knew it was going to be tough because there is no Singapore mission in Mongolia.

He said: "This makes the situation very challenging because we do not have people familiar with the country, its systems and their language." Thus began a long search for the man and his lawyer.

He added: "We also had to find out where he was being held.

"It took us months of constant checking with our various official and unofficial contacts in Mongolia to acquire basic information regarding the Singaporean and his whereabouts."

He enlisted the help of the Mongolian Foreign Ministry and an interpreter.

When Mr Ng tracked him down, he caught a 2 ½-hour flight to Ulan Bator, Mongolia's capital, and then a 30-minute bumpy ride to the prison.

The first words the man had for Mr Ng were simple: Thank you.

"He thanked me for visiting and said that it was very nice to be able to finally speak to a fellow Singaporean.

"He even said that the sound of the Singaporean accent was a great source of relief and comfort."

As the conversation went on, the man broke down when talking about his family.

Though sympathetic, Mr Ng said he had to work to keep his emotions in check because it would have been "unprofessional for me to break down as well".

Mr Ng, who has been with MFA for eight years, told The New Paper that he found cases involving death and grieving relatives more challenging.

"Those, I find, are actually the toughest cases. Toughest because they involve considerable emotional labour," he said.

But the job does come with its satisfying moments.

Mr Ng recounted an incident where a man called the Seoul mission in the early hours on a Saturday asking urgently for a temporary travel document.

His passport was being held at Korea Immigration Services for his work visa application.

It was only later that he found out the man had to urgently return to Singapore for his father's funeral.

"Issuing temporary travel documents is quite a basic and common request that consular officers often get so I didn't think too much of it. His thank you letter therefore came as a pleasant surprise and was very encouraging."

He added: "Sometimes it's just good to know that the little things that we do actually mean so much to the people whom we help."

Dealing with deaths on mountain

The travel group had been told that May was not a good time to go up Mount Kailash, a popular pilgrimage spot in west Tibet.

But the 10 Singaporean pilgrims went up anyway, just to be at a sacred lake on Vesak Day, which fell on May 5 last year.

Two in the group, a 66-year-old man and a 61-year-old woman, died after developing severe mountain sickness at the 5,500m Dolma-la pass, the highest point of their journey.

The rest were stranded at various parts of the mountain, which is more than 6,000m high.

Mr Teng Weng Chau, who was then a counsellor at the Singapore Embassy in Beijing, was activated to help after the family and travel agent notified MFA.

Mr Teng, a 20-year veteran with MFA, who is now a deputy director of its Consular Directorate, said that step one was locating them.

From Beijing, Mr Teng and a colleague tracked down and called every Singaporean in the group.

Some were "crying for help and understandably feeling very emotional".

"My colleagues and I kept in close touch with them throughout to give them a listening ear," he said.

"In situations like that, sometimes people will not be able to think rationally. This is understandable. They are in deep distress and we try our very best to be understanding and compassionate," said Mr Teng.

He got himself on the first flight out of Beijing to Chengdu in Sichuan province, which had two flights going to the Tibetan regional capital of Lhasa every day.

The best solution was to fly in through Chengdu, which had two flights going to the Tibetan capital every day.

He said he also coordinated with the two grieving families and the embassy helped to arrange special permits for the families to go to Lhasa quickly.

But Mount Kailash, in Ali prefecture, was not easy to reach. It's about 1,200km out of Lhasa.

The undertakers took 19 hours to drive there.

Working with local officials, Mr Teng went about evacuating the survivors in a gruelling three-day journey from the mountain to Lhasa before going on to Chengdu, where they caught a flight home.

The Chinese authorities also helped arrange for the survivors to return to Singapore.

Helping those in trouble

While his mother lay in a Johor Baru nursing home, the man, who was back here in Singapore, refused to pay her nursing home fees. Two months had lapsed since his last payment and he owed the home RM6,000 (S$2,300).

Not knowing what to do, the nursing home owner contacted the Singapore Consulate in Johor Baru.

The man blamed the ministry for disturbing him and said it should just use his CPF to pay off the home. He even raised his voice and dared Mr Quek to take him to court before hanging up.

On the second call, the man simply hung up.

"I shall be honest, I felt quite demoralised after being treated rudely," Mr Quek told The New Paper, adding that he persevered because "in my mind, I knew that I needed to help the Singaporean lady".

"I actually empathised very much with her situation and wanted to reunite her with her family as soon as possible."

While consular officers often have to deal with difficult and heartrending cases, Mr Quek said officers have to remind themselves that there are guidelines to follow and that they have to stay professional.

He said: "In our line of work, we meet with Singaporeans on one of the worst days of their lives.

"Thankfully though, most are appreciative of our assistance. There are some who are rude or unreasonable, but these are far and few between," he added.

The occasional note or personal "thank you" comes as a pleasant surprise.

Once, when he was in Little India, a man went up to him and shook his hand.

He said: "I recognised him (as someone I had helped in Johor Baru) and was very touched that he remembered me even after a year."

The village chief, who found her, contacted the Johor Mission who made arrangements to take her back.