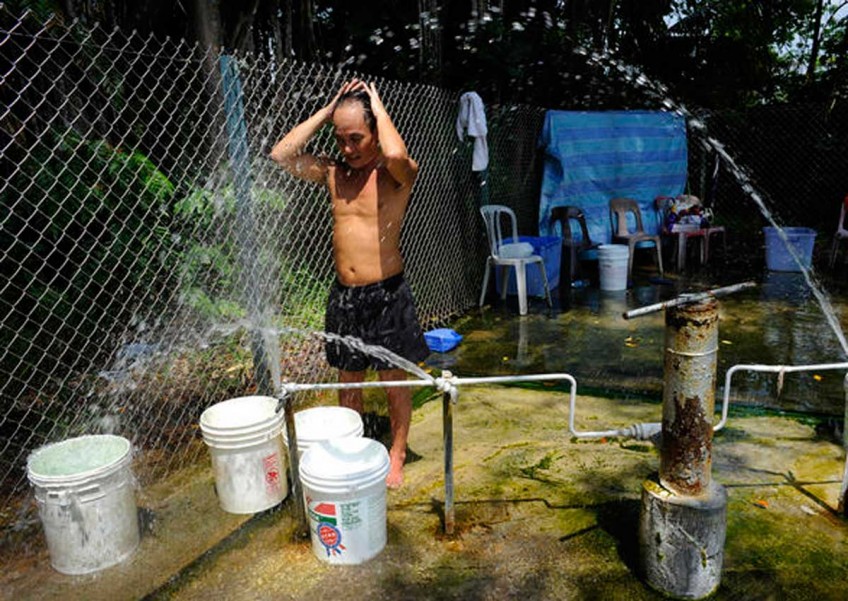 SINGAPORE - The Ministry of Defence (Mindef) has agreed to return back to the State the land that the Sembawang Hot Springs is on, said Senior Minister of State for Defence Ong Ye Kung on Saturday.

The hot spring, the only one on mainland Singapore, currently sits inside a military camp.

"The place is small, rustic and charming, but desperately lacking in amenities, such as a toilet. But it is really not Mindef's mission to look after a hot spring," said Mr Ong, who was speaking at a seminar where Malay youths discussed ideas to shape Singapore's future. "So after some discussion, Mindef has agreed to give up the land, and return it to the State. From there, we hope a public agency such as NParks (National Park Board) can take over, improve the amenities, beautify and maintain it."

He added that putting the place under a public agency means that the land will not be tendered out to the highest bidder and become commercialised. Instead, its rustic charm can be preserved while putting in small conveniences and more greenery.

At the event, Mr Ong, who is also Acting Minister for Education, also spoke about his expectations for Singapore in 2065.

Building Singapore's history and its people's memories and identity is the country's collective national project for the decades and centuries to come, he said.

"I doubt it will be realistic to have a plan for the next 50 years. We can only evolve with the times and the circumstances surrounding us," he said at the event held at Suntec City Convention Centre. "We adapt, and with each adaptation we become more distinctively Singaporean, yet more relevant to the world around us."

In a 35-minute speech to 500 youths, he shared three characteristics he would like to see in Singaporeans: a strong sense of belonging; an emotional attachment to family, friends and fellow countrymen; and a national team spirit.

In building a sense of belonging, Singapore "cannot just bulldoze and build" when developing a place, said Mr Ong, who is also an MP in Sembawang GRC. "We need a piece of old Singapore infused with the new."

He cited his constituency's plans to develop the Sembawang Wellness Hub, which used to house rubber and pineapple plantations and the old Chong Pang market. Today, it is a forested hill where the Admiralty House, a gazetted national monument that used to be the home of the British Admiral that oversaw the Sembawang Naval Base, continues to sit atop. "We are working with various agencies to carefully develop the area. It will be a mistake to clear the entire hill and build it up - it will be utilitarian but characterless," he said.

The National Park Board plans to preserve 600 of the 761 trees and plant another 1,000 using seeds of trees that were indigenous to Singapore but are no longer around. There will also be a new polyclinic, a swimming pool and a hawker centre that will serve healthier versions of the traditional street food served at the old Chong Pang market. And the forest will remain for residents to stroll, climb and visit the Admiralty House, Mr Ong added.

He also highlighted efforts to build emotional attachments among residents here, such as the recent Indian Cultural Festival that brought together the many Indian communities living here for a combined Indian New Year celebration.

In fostering national team spirit, he said: "When we grow our economy and create jobs, it has to be for everyone, or as many Singaporeans as possible. We do not grow the pie for only the 1 per cent or 5 per cent."

He also addressed worries about technological disruption that will replace workers with robots and computers, noting that such concerns are nothing new. "The steamship, automobiles, airplanes, exploitation of oil and gas to power machines, computers, Internet, smart phones - these have been transforming our lives and economy for a long time," he said.

Each time, old jobs were destroyed but new ones created.

He also pointed to bright spots such as the growth of Asia, the booming consumer markets in China and untapped markets in Singapore's closest neighbours, Malaysia and Indonesia. "To ride on the growth... we need good companies and businesses," he said, calling on the youths to work together.

The seminar was organised by the People's Association Malay Activity Executive Committees Council.