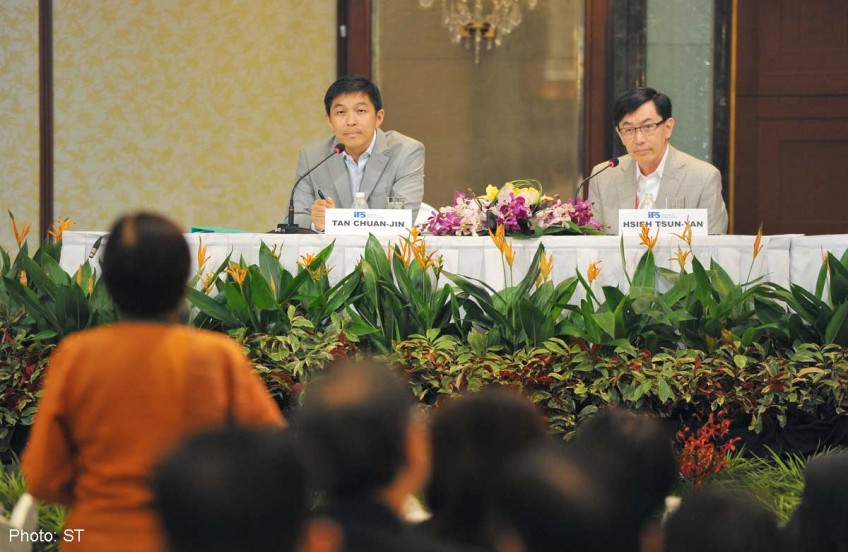 THE Minimum Sum an average Singaporean must save for retirement in his Central Provident Fund (CPF) account, particularly the pace at which it is going up, came under scrutiny at a forum yesterday.

Two participants asked if wages were rising fast enough to keep up with the recent annual increases in the Minimum Sum.

Another participant called for a change in the way the Minimum Sum is calculated, urging that the formula exclude imputed rent, which is what home owners would pay if they were renting their homes.

In response, Manpower Minister Tan Chuan-Jin, who was one of the speakers at the Institute of Policy Studies (IPS) forum, gave figures to show that people's real wages - which take into account inflation - have gone up in the past few years, including those of the lower income.

Hence, Mr Tan is confident that more and more people will be able to meet the Minimum Sum.

The issue of the Minimum Sum has been at the forefront of an ongoing debate among many in Singapore - about whether people can meet the rising amount, which was $80,000 in 2003.

Since then, it has risen yearly to adjust for inflation.

But the sum is already too much, too soon, said financial consultant Edwin Siew and blogger Roy Ngerng at the forum.

They argued that wages are stagnating and not growing fast enough to keep pace with the continual rise in the Minimum Sum.

Also, the CPF interest rates "have grown a lot slower than the CPF Minimum Sum", said Mr Ngerng, who is being sued by Prime Minister Lee Hsien Loong for defamation, for alleging that Mr Lee criminally misappropriated CPF monies.

When the Minimum Sum is not met, a Singaporean is allowed to withdraw only up to $5,000 in cash from his CPF savings upon turning 55. The rest goes into his Retirement Account, half of which can be in the form of a pledge on the home he owns.

Mr Tan noted that overall real wages have risen by 2 per cent to 3 per cent in the last few years, with the progressive wage model helping low-income workers like cleaners get higher pay according to a wage ladder. The Workfare scheme also tops up the salaries and CPF accounts of those earning $1,900 and less a month.

But executive Alan Ng of NTUC Income worked out that the Minimum Sum would shrink by $10,000 if imputed rent is taken out of the inflation formula.

He asked why these rents are included in calculating the Minimum Sum, when many Singaporeans own their homes.

Mr Tan said the Government is looking into it. "In terms of computing our inflation rate, one of the things we're looking at is actually imputed rents... (This) is something that perhaps we may want to consider not including," he said.

At the discussion, economist Augustine Tan expressed concern that wages were too high and eroding Singapore's economic edge, saying: "Are you not giving way too much to social pressure to raise wages, even when the economy really cannot afford it?"

The minister replied: "The answer is no. Foreign labour growth needs to be kept at a sustainable pace."

But the professor raised a valid point and there were "contending pressures" at play, he said.

"On some of the challenges we face, you will realise there are actually divergent pressures... But at the end of (the day), we do need to make that judgment call about how best to strike the balance between all the different pressures."

The Institute of Policy Studies should offer to educate people on the fact that 55 never made sense. It was a colonial hangover.

When UK coal miners were working until 65, the Brits here fixed 55 so they could go back and become a bursar of an Oxford college or something. A

nd then when poor (former health minister) Howe Yoon Chong (proposed in 1984 to raise the CPF withdrawal age from 55 to 60), we behaved like idiots and clobbered the Government at the next election.

It is so hard for us to get statistics based on age, gender, and who are the people who really are the beneficiaries of CPF.

For us to give you relevant feedback, that is very important... I think the CPF is accountable to all its members to give as much information as possible.

This is not national security or anything like that. - Dr Kanwaljit Soin, immediate past president of Women's Initiative for Ageing Successfully (Wings), on seeking disaggregated CPF statistics.

How about doing a survey? At this current moment, based on the last CPF reports, 50 per cent of the people can withdraw (money from their CPF accounts after setting aside the) Minimum Sum.

What happens to their lives after they've withdrawn their CPF?

Based on what we see, we have seen members who turn 55, I tell you that's the worst thing that happens to them, because they meet some young girls and then their families totally break down. - Mr Alfred Chia, chief executive of financial advisory firm SingCapital, on the Minimum Sum being an important safety net for some who cannot manage their finances