Minister for Defence thanks NDP participants 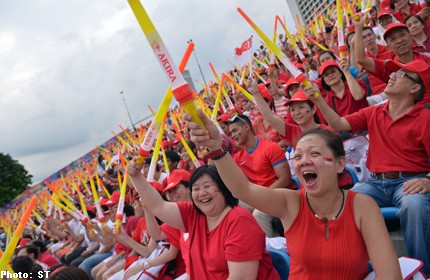 SINGAPORE - Minister for Defence Dr Ng Eng Hen has thanked the participants of NDP 2013 for making this year's parade successful and memorable.

This was part of his speech at the National Day Parade 2013 Appreciation Dinner at Ritz Carlton Hotel on Friday.

"Many people came up to me and they shared how NDP moved them. You know sometimes they will tell you that NDP was very good but not so often would they say that NDP moved them. One particular person said that on few occasions that the hair on her arms stood. They felt connected to the various stories that you were able to tell through your performances. Extraordinary stories of ordinary Singaporeans. And many of them said it was their best NDP yet."

He noted the commitment and passion of all the contingents, and that the national athletes and extreme sportsmen were full of energy.

Special praise was given to the Muslim participants for participating during their Ramadan month. "I know for a fact that religious wise, if they wanted they could have dispensation because of the hard work. They could break their fast. But every time I come down and I asked them if it was difficult, they shrugged their shoulders, they continued with their fast, they smiled and said: "No problem!" Really very positive."

Dr Ng also touched on some of the difficulties faced during the rehearsal period, such as the haze and theme song.

"Remember the haze? We had to cancel one of your rehearsals. And the song initially received mixed responses. But at the end of it, it was your whole-hearted and enthusiastic performance that won Singaporeans over. I watched the show a couple of times and at the NDP itself, I was watching out for people's reaction to your performance. I did not watch you as I knew what you were going to do. I knew very early that it will be a success because some of them were laughing at the right time, some of them were captivated, some of them were very surprised and awed."

As for all-time NDP favourites, he brought up the dynamic defence show and the aerial fly-past, in which he said the soldiers, policemen, Home Team personnel, volunteers and National Servicemen did Singapore proud.

As he ended his speech, he gave his heartfelt congratulations to all the participants, partners, volunteers, and organising committees.

"Thank you for making it possible. I hope you all leave NDP 2013 with fond memories and wonderful friendships. I look forward to your continued support for NDP."