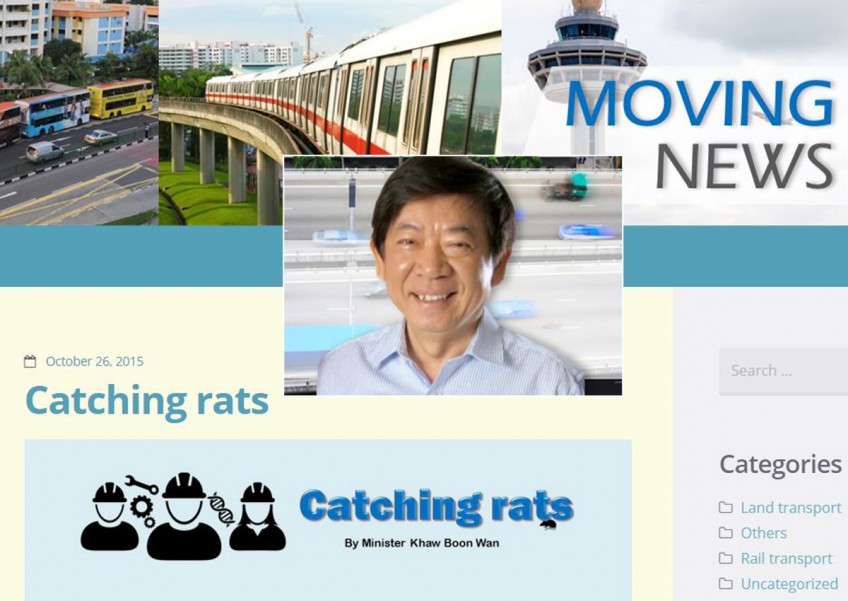 Mr Khaw wrote in a blog post that train breakdowns "tarnish our reputation" and that "Singaporeans deserve better".
Lianhe Wanbao

In a blog post after the latest train disruption that occurred on Monday morning on the North-East Line (NEL), Mr Khaw shared an email message that had been sent to him by Mr Tan Gee Paw, the chairman of PUB who he recently named as his rail transformation advisor.

In the email, Mr Tan had referred to "street-smart, sharp-eyed practising engineers" as "rat catchers" - "the ones who will walk through the system and spot the risky parts of the system, beyond the codes of practice and alert us on what modifications must be made urgently".

Mr Tan explained: "As the system ages, more rats will appear and we will never get over this. Only way is to bring in the rat catchers. We do this in the sewerage system, and we have in PUB engineers who know what must be done beyond the standard codes of practice.

"Unfortunately our experience is not in rail systems, but nonetheless I will ask my departments if they think they can be of some help in rat catching for rail systems. But you must do a risk analysis on the entire system using street smart, sharp-eyed rat catchers."

In his post, Mr Khaw had said that "Singaporeans deserve better" and that train breakdowns "tarnish our reputation".

"We are re-doubling our efforts to improve train reliability," he wrote.

According to statements issued by the Land Transport Authority (LTA), investigations showed that a new train being tested this morning had damaged the overhead power system installed on the ceiling of tunnels when it was being returned to a depot.

As a result, train services in both directions on NEL were disrupted. Free bus rides and shuttle services were initially provided at designated bus stops along the train line.

NEL services in both directions were restored at 7.20am, but at reduced frequency.