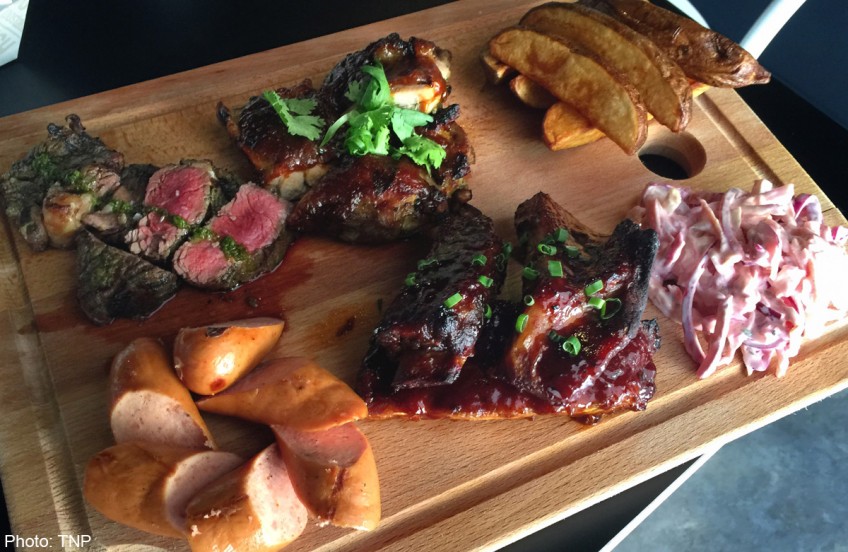 The latest food-and-beverage outlet at the Esplanade Mall is also the latest celebrity-owned restaurant in Singapore.

Americana is not a new concept but the famous faces are an attraction - the restaurant is good for star-spotting.

I recommend going on a Sunday afternoon - the only afternoon when it's open - because it's perfect for a lazy few hours with a bottle of beer by your side (or wine, if you're so inclined, and Mischief has an extensive list of alcohol) and just taking it slow.

The menu, as my lunch partner observed, is very masculine. It is full of meat to go with beer.

But the portions for the starters are quite demure. The prices look friendly on paper but when the dishes were served, they were smaller than I expected.

It seems that Mischief makes up for the scanty portions with the mains -they appeared plus-sized to me.

The Tailgate Grill ($53) for two has pork sausages, pork ribs, jerk chicken, ribeyes, potatoes and lemon lime slaw. The ribs were fall- off-the-bone tender and the slaw was exceptional. I just wish it was a bigger portion.

The Great Balls of Fire ($14) are meatballs - a tad dry but full-flavoured - with an amazing marinara sauce. The portion is tiny, the individual meatballs ever tinier. But ultimately, the flavour wins.

When I think American food, I think of a cheeseburger. The one at Mischief, called good ol' cheeseburger ($22), is hardly extraordinary but it is tasty and fills up the stomach. The patty is hearty and juicy, served with a side of well-fried fries.

Mischief Wings ($15) come with a choice of garlic soy sesame glaze, Cola BBQ Sauce or Mischief Hot Sauce. The garlic soy sesame wings were a tad salty, so perhaps we should have taken the server's advice and gone with the hot sauce.

Big Dog Soft Taco ($8) is a taco for one. Choose a filling of Korean BBQ beef, jerk chicken or fried fish. We chose beef. With the way the ingredients complemented each other, you might be tempted to order another.

This article was first published on Mar 25, 2015.
Get The New Paper for more stories.