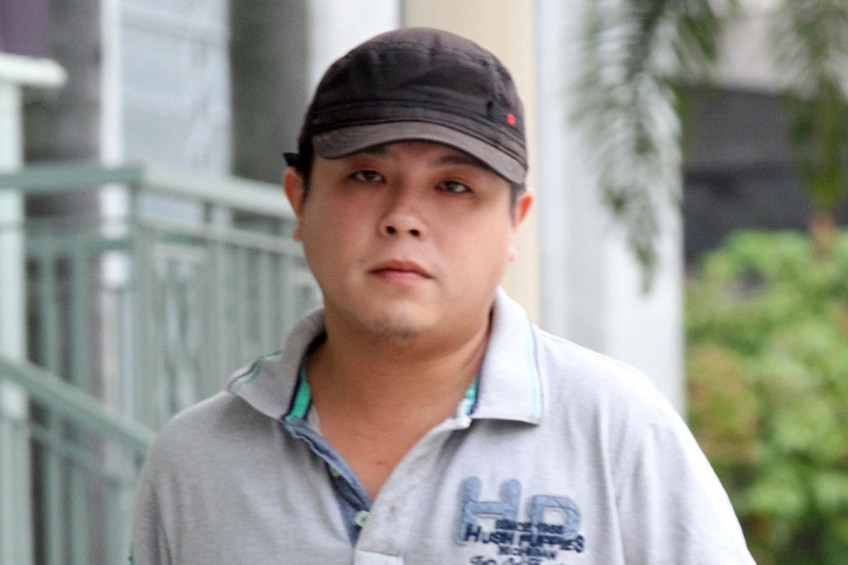 Four months after setting up Mobile Air, he masterminded a scheme to lure unsuspecting customers to his Sim Lim Square shop by offering mobile devices at low prices.

Jover Chew Chiew Loon and his crooked sales team would then deviously include exorbitant add-ons to inflate the price and use bullying tactics to force through the sale.

Between January and October last year, Chew and his accomplices cheated 26 customers of $12,199.

He first made headlines last October after giving a customer $547 in coins as part of a $1,010 refund ordered by the Small Claims Tribunal.

He was in the spotlight again the following month after a video of a Vietnamese tourist kneeling in his shop and begging for a refund went viral.

Yesterday, Chew, 33, pleaded guilty to 10 counts of cheating, one count of criminal intimidation and one count of using insulting behaviour to a customer.

He was the one who developed the modus operandi to cheat customers and imparted it to his employees.

One of the 26 victims was Bangladeshi national Lutfur Rahman Abdul Alim, 41, a construction worker who earned about $1,300 a month.

After comparing prices in a few shops, he saw that Mobile Air was selling a Samsung Galaxy Note 2 for $330.

After paying the $330, he was told by Kelvin Lim to pay an additional $600 for a two-year warranty.

When the Bangladeshi asked for a refund, Lim said he would have to compensate Mobile Air $1,000 for breach of contract.

At this point, Chew entered the shop and told Mr Lutfur Rahman that he would fine him $1,000 if he did not purchase the warranty.

He did so fearfully because there were six salesmen in Mobile Air.

But Lim was unable to deduct the $600 using a Nets machine from Mr Lutfur Rahman's account as there were insufficient funds.

The salesmen shouted at Mr Lutfur Rahman and one of them followed him to the ATM and checked his bank balance, which read $307.

They then made him pay $300 and handed him a mobile phone that was not working.

On another occasion, Chew paid Chinese national Liu Jinhui part of her refund in coins amounting to $547.

After the bag of coins fell on the floor, he made Ms Liu pick them up and filmed her doing so with intent to cause her distress.

Yesterday, Deputy Public Prosecutor Eunice Lim said in her sentencing submissions that Chew had tarnished the reputation of Singapore as a retail and tourism destination.

For example, China issued a travel advisory to its citizens to exercise caution when shopping for mobile phones and electronic devices in Singapore, she said.

DPP Lim also said Chew had targeted foreigners and many of his victims were low-wage workers who understood limited English.

The prosecution called for a 36-month jail term in light of pressing public interest and as a deterrence to dishonest retail practices.

Chew's lawyer, Mr Mathew Kurian, said his client had made full restitution to the victims and was remorseful.

Chew is expected to be back in court on Nov 30 for sentencing.

How they cheated customers

A Mobile Air salesman would offer a mobile device at a low, attractive price to walk-in customers.

After the customer agreed on the price, the salesman collected the full payment.

The salesman would then open the packaging of the mobile device in front of the customer but would not hand over the goods.

He would ask the customer to sign an invoice that reflected the agreed price.

The salesman would then take the opportunity to write additional items on the invoice, such as an in-house package or warranty, and alter the total price.

After this, the salesman would demand more money as stated on the altered invoice and refuse to hand over the product unless the customer paid the total price.

The salesman may eventually settle for a smaller additional amount or get the customer to accept a cheaper device.

If the customer aborted the purchase, the salesman would not give him a refund or would retain most of the initial payment as "cancellation fee".

Apart from the invoice, former Mobile Air owner Jover Chew also used such documents as warranty forms and cancellation agreements - which showed bogus items such as "$100 for opportunity cost" and "$180 for reflashing (sic) service" to fleece his customers.