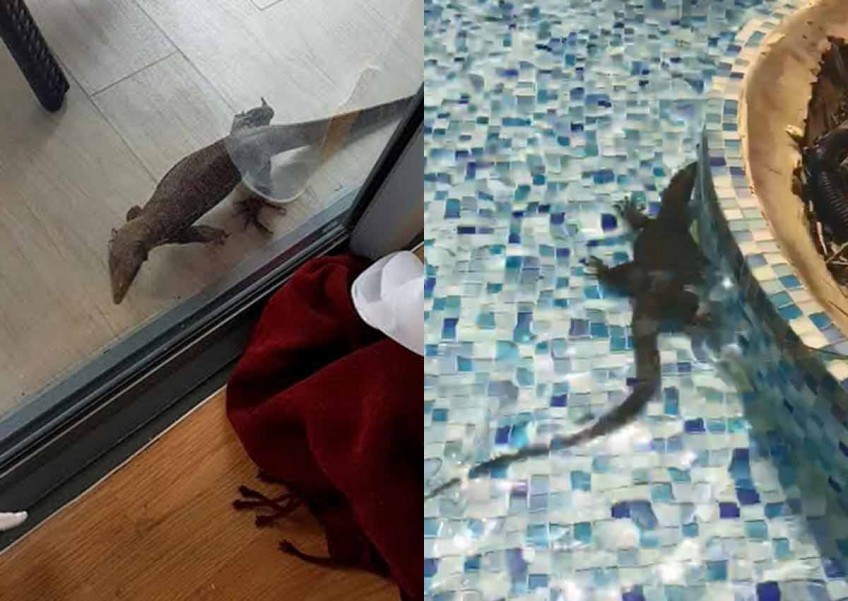 SINGAPORE - The adorable "Bishan 10" family of otters may have become the face of Singapore wildlife, but now it looks as though monitor lizards are intent on giving them a run for their money.

On Thursday (Mar 9), a monitor lizard was caught on video taking a dip in a condo swimming pool.

But not before it tried to enter a Yishun resident's condo unit by - gasp - attempting to slide open the balcony door with its leathery claws.

Reader Paveena Kumar, 27, sent photos and videos of the incident to AsiaOne.

The public relations professional told AsiaOne that the scaly visitor was first spotted by her domestic helper in the balcony of her ground floor unit at her home in Yishun at about 4pm.

"It looked like it was trying to open the sliding door of our balcony to get into the house, and then jumped to the balcony of a neighbour's unit before going into the swimming pool," she recounted.

Read also: Monitor lizards sighted in bizarre places: Here's where and why

Ms Paveena said that the fork-tongued creature spent about half an hour in the pool. It was eventually cornered and caught by a resident, who released it into the forested area near the condo.

She added that it was the first time that she could recall seeing a monitor lizard enter her condo.

Taking a dip in the pool seem to be a favourite past time of these reptiles lately. In February, another lizard that was filmed having a swim in the lazy pool at the Jurong East Swimming Complex. And who can blame them with when the weather is so blistering hot?

Basking in the sun and frolicking in pools may seem like what these reptiles love to do, but they can be involved in pretty fast and furious activities too, such as the one that zipped past the race track last September during the Formula One Singapore Grand Prix.

It caused Red Bull driver Max Verstappen to exclaim in shock: "There's a giant lizard on the track!"

Mr Kalai Vanan, deputy chief executive of the Animal Concerns Research and Education Society (Acres), previously told AsiaOne that the organisation gets between 20 and 30 reports on monitor lizards in a month.

He added that these creatures are shy animals that are typically harmless, despite their large size.

Shy? Not anymore, it seems.