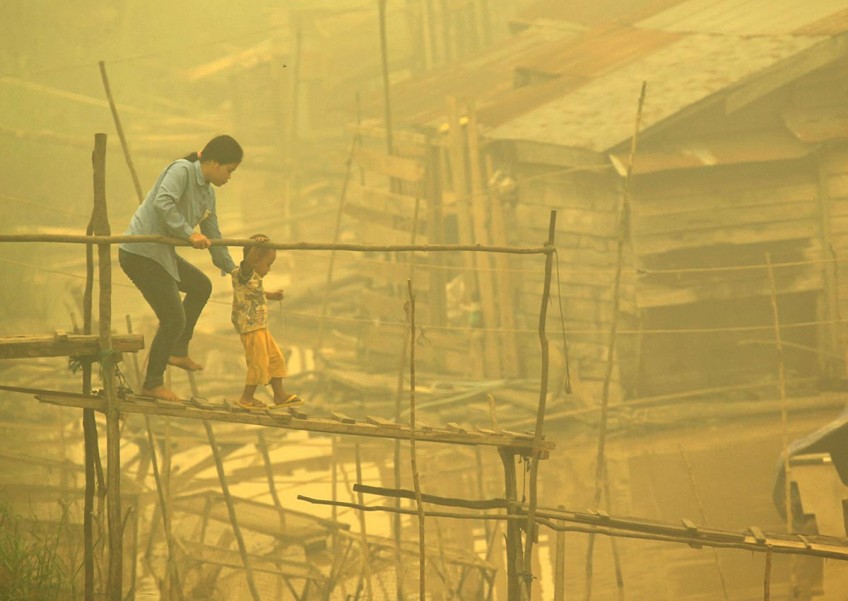 The strongest motivation to resolve this year's transboundary haze crisis - statistically proven to be the worst in a decade - must be a moral one, Defence Minister Ng Eng Hen has said.

And those who own or use the land for commercial purposes must bear responsibility for the fires raging over them, Dr Ng added yesterday, as he welcomed the Singapore firefighting assistance team that returned home after a two-week mission to Indonesia.

"The haze has impacted the lives of millions of residents in our region in many ways. Schools have closed and the volume of business has dropped. Tourist arrivals will plummet if this becomes a chronic issue," Dr Ng wrote in a Facebook post.

"But to me, the strongest motivation to deal with the haze for Indonesia must be a moral one - the health of hundreds of thousands of their own citizens are affected by this man-made disaster as they breathe in high levels of pollutants. These are strong reasons to act decisively."

Yesterday, Indonesia's Coordinating Minister for Political, Legal and Security Affairs Luhut Pandjaitan told The Sunday Times that the government plans to claw back concessions in peatlands that have not been cultivated, to prevent companies from using the slash-and-burn method to clear land.

The move is seen as a strong indication that Indonesia believes peatland restoration must be the focus of any efforts to end the haze crisis.

Indonesia's Meteorology, Climatology and Geophysics Agency estimates that more than 43 million people in the country are breathing in the toxic fumes from the fires.

The haze has also hit Singapore, Malaysia, Thailand and the Philippines, forcing airports to delay or ground flights and schools to close as well.

The human costs, however, are the highest in Indonesia, where there have been unverified reports of more than 10 deaths, including babies, from lung infections.

Dr Ng said Indonesian leaders, including President Joko Widodo, have realised that what is key in preventing this environmental disaster from recurring is prevention and enforcement.

"I applaud the President's ideas and initiatives. The industrial scale of this disaster - millions of hectares burning - requires a systemic, deliberate and multi-prong response to be effective."

He added that there is no shortage of international expertise to help in the crisis.

The SAF team was accompanied by a six-man Disaster Assistance and Rescue Team from the Singapore Civil Defence Force (SCDF).

"The Indonesian authorities accepted help from various countries, including Singapore, to deal with the haze for an initial two-week period," said Dr Ng.

"With the two-week period concluded, our SAF and SCDF personnel returned home today.

"This is the worst haze situation to affect this region in a decade. Our deepest thanks to our men and women who overcame difficult conditions on this mission to put out hot spots and help the surrounding villages."