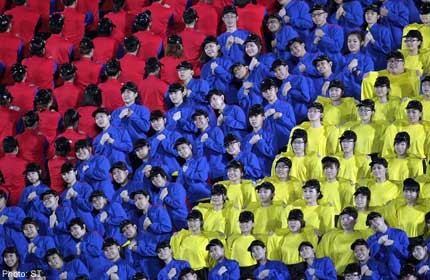 The colourful start to last night's National Day Parade show lasted about four minutes - but it took 800 performers from Soka more than 72 hours to perfect.

Each member dressed in a multicoloured costume displayed a particular colour at a given moment to produce a synchronised image.

Together they produced over 70 LED-like images that illustrated local folk tales.

The first section of the show was called Play and chief choreographer Tan Wei Hao said it was one of the most challenging displays the Buddhist association had performed.

The 30-year-old said: "Every single one of the 800 members needed to flash the right colour at the correct moment, or else the image wouldn't be perfect.

"They needed to be sharp individually but work as one."

Mr Gary Chew, 22, who had performed in two previous National Day Parade mass dances, admitted: "This item was more difficult than those of previous years.

"For dances, you could copy the person next to you if you forgot your steps, but for this, you have to memorise your own."

The performers showed off their daredevil stunts, which included flipping and cartwheeling to pulsating beats, in a segment called Reinvent.

Project manager Alison Ang, 36, who was part of the 80-member parkour team, said: "We were split up into different groups so we were allocated our space.

"Then we discussed among ourselves how we wanted to interact.

"It's always exciting to be part of a big show. This was so much fun."