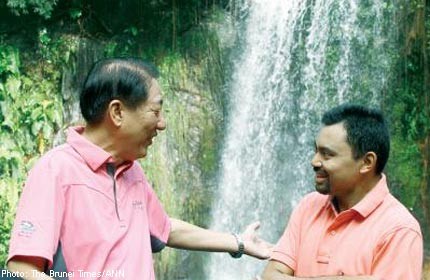 Before the walk, HRH the Crown Prince, HRH Prince 'Abdul Malik, Teo and cabinet members from Brunei and Singapore, participated in a warm-up exercise. Cordial conversation between His Royal Highnesses and Teo continued throughout their walk, as well as between government officials from both countries. The event also represented an opportunity for more friendly exchanges between younger leaders of both countries.

The occasion continued with trekking on the hills leading up to the Tasek Reservoir. Upon reaching the summit, His Royal Highnesses and Teo climbed the observation tower that overlooks Bandar Seri Begawan. His Royal Highnesses, Teo and the rest of those in attendance then enjoyed an al fresco-style breakfast overlooking a scenic view of the waterfall.