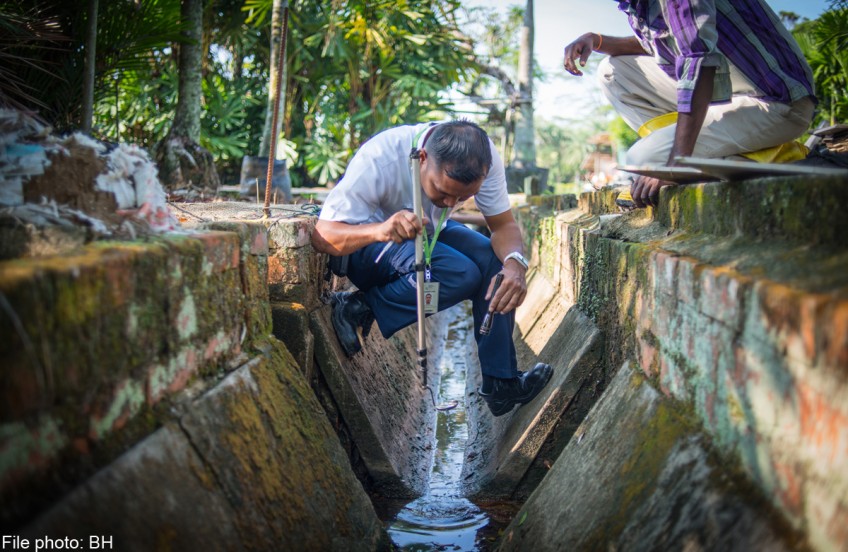 SINGAPORE - Chua Chu Kang GRC MP Zaqy Mohamad has called for heavier penalties for construction companies found to have mosquitoes breeding at their sites after one apparently sparked a dengue outbreak in his Keat Hong ward.

China Jingye Engineering, the main contractor for the Sunshine Gardens Housing Board development, will be prosecuted in court for mosquito breeding after it allegedly caused the largest dengue cluster in Singapore's history.

As of Tuesday, there were 316 cases - 115 of which involved workers from the site. The rest were made up of 195 local residents and six workers from a nearby construction site run by Keat Hong Pride.

The number of cases has grown to 391, as of yesterday.

It is the fourth time action has been taken against China Jingye Engineering for mosquito breeding. It was fined more than $10,000 in total previously.

The cluster was formed on June 25 when three workers from the Sunshine Gardens site came down with dengue, the National Environment Agency (NEA) said.

A stop-work order - the second the company has received - has been in effect since then. After the first stop-work order in November last year, HDB imposed an administrative charge of $10,000 and 100 demerit points on the contractor.

A stop-work order was also issued at the Keat Hong Pride site, though so far, no further action is known to have been taken there. Mr Zaqy said it was very likely that the outbreak started from the Sunshine Gardens construction site and spread to housing estates. "It's quite upsetting, we've always had very few cases. It's disappointing that despite the various measures taken, we had an external party close by cause the outbreak, and they've also contributed to a third of the cases."

Chua Chu Kang Town Council had been in the midst of replacing concrete slab drain covers with metal grille ones to enable quicker drying of drains when the cluster outbreak occurred.

China Jingye Engineering should be banned from tendering for HDB projects for at least half a year, Mr Zaqy said.

He added that any fines meted out should be scaled to the size of its construction project and the "huge impact" it has had on residents and their health.

"They have to feel the pinch. Look at the number of cases they've sparked in Chua Chu Kang," he added.

HDB said yesterday that it has banned China Jingye from tendering for its contracts for three months.

An HDB spokesman said: "HDB takes a serious view of China Jingye's improper dengue control management. In view of its second stop-work order last month, we are looking into tougher penalties against it. This could include demerit points, administrative charge and extension of their tender restriction."

Construction firms found to have mosquitoes breeding on their sites are usually given stop-work orders until their site is completely free of them.

NEA said it will pay particular attention to "high-risk sites such as those with poor track record", and impose stricter requirements and, where necessary, longer stop-work orders, to break the transmission of dengue.

Keat Hong residents, meanwhile, said they were shocked by the outbreak. They, too, are blaming the construction sites. "I've lived here since 1998 and there were never this many cases," said housewife Jasmah Abu Bakar, whose 27-year-old daughter was diagnosed with dengue on Tuesday.

"I noticed these only after the construction started."

The family has placed mosquito coils in each bedroom, and tries to keep windows closed.

No breeding sites have been found in the flat but Madam Jasmah, 52, said the NEA has been conducting regular home visits as well as neighbourhood fogging.

"I'm watching my daughter suffer and a few of my neighbours have also kena (been hit) last month, so I'm more worried now.

"I'm not sure what more we can do at home, other than hoping that we don't get sick," she said.

There were 565 new dengue cases between Sunday and 3.30pm yesterday, down from 630 over the same period last week.