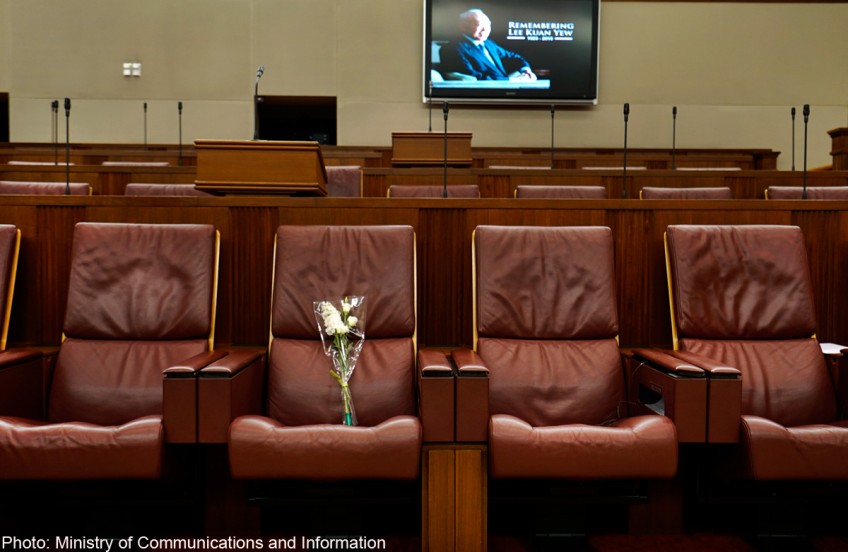 A spray of white flowers occupied the late Mr Lee Kuan Yew chair during the special sitting of Parliament held on Thursday, March 26, 2015, to pay tribute to his achievements. The 110-minute session ended with a minute of silence.

An empty chair with a small spray of white flowers was a poignant reminder of a vast gap in Parliament House yesterday.

Mr Lee Kuan Yew's seat in the front row, fourth from the corner, opposite the Front Bench, was empty.

He will never sit there again.

When former deputy prime minister Wong Kan Seng came in and was confronted with the sight, he took his seat next to it and dabbed his eyes discreetly. He later described the day as one of the saddest of his life.

Mr Goh Chok Tong, whose seat is on the other side of Mr Lee's, kept looking left. "But he was not there," he said later.

Yesterday, the House that Mr Lee served for 60 years gave him a fitting farewell, with a special 110-minute sitting both understated and simple. Most male MPs wore white shirts and dark ties with black ribbons; the women came in dark dresses and jackets, white roses on their chests.

In the public galleries were former MPs, unionists, civil servants, students and members of the Lee family.

The 11 MPs who spoke recorded the nation's thanks for Mr Lee's contributions and highlighted his role in leading Singapore from mudflats to metropolis and in building a multiracial society.

Speaker Halimah Yacob kicked off the proceedings, recounting how Mr Lee entered the colonial Legislative Assembly as the Member for Tanjong Pagar in 1955.

He led the People's Action Party to victory and self-government in 1959. He went on to lead Singapore for 31 years till 1990 as Prime Minister, and remained in Cabinet until 2011. He was still representing Tanjong Pagar when he died on Monday, aged 91, the longest-serving MP.

Madam Halimah highlighted remarks he made in 1999, when MPs moved from the old Parliament House to the current building. Noting that Parliament was an arena for the contest of ideas on policies, he said: "In this Chamber, we are playing for keeps. The future of Singapore and its people… is not a question for light-hearted banter."

Matters of life and death, of policy and politics, were raised by Mr Lee over the decades.

Leader of the House Ng Eng Hen highlighted one milestone - Mr Lee's call to Singaporeans to adapt to the reality of the British military withdrawal in 1968, taking away one-fifth of Singapore's GDP: "Adapt and adjust, without any whimpering or wringing of hands."

He added that "the world does not owe us a living and ... we cannot live by the begging bowl".

That hard-headed approach would extend to debates on bilingualism, the judiciary, ministerial salaries and race, among others.

Mr Low Thia Khiang of the Workers' Party credited Mr Lee's "outstanding wisdom and courage" in promoting Singapore to the world, and winning the respect of major powers.

But his remark that "many Singaporeans were sacrificed during the process of nation-building and policymaking" drew a swift rebuttal from Ms Indranee Rajah that the sacrifice required was to "set aside divisions and animosity in the interest of national unity".

The Malay community in Singapore, he said, was proud that it could compete and excel in education and employment on an equal footing, without special treatment for minorities.

Mr Vikram Nair quoted lines from a poem in Tamil that praised Mr Lee for treating all races equally, and for making Tamil one of the four official languages.

Several MPs also alluded to the way Singaporeans had queued for hours in the sun, or overnight, without complaint, to wait their turn to pay respects to Mr Lee.

His body lies in state in the lobby of Parliament House until Sunday when he will be cremated after a state funeral.

Ms Indranee said Singaporeans responded thus because they knew that all of Mr Lee's actions sprang from his deep care for Singaporeans. She said that was Mr Lee's legacy: "a people united; a people with heart; a nation strong and free".

The most emotional tribute came from someone who never met Mr Lee.

Nominated MP Chia Yong Yong, who uses a wheelchair, said that if she had been born anywhere else in Asia, "as a girl with a disability coming from a poor family with no connections, I would not have been able to go to school, enter a profession and serve the community today".

In words that drew hearty thumps of approval in the House, and will resonate with many more outside it, Ms Chia said: "Son of Singapore. Father of Singapore. Pardon my inability to craft a tribute worthy of you. Words fail me.

"And today, all that I can say to you, my first Prime Minister, is what I never had the opportunity to tell you in person: Thank you, Mr Lee."

MPs then stood to observe a minute of silence, before filing out in groups to pay homage to the man who started it all.