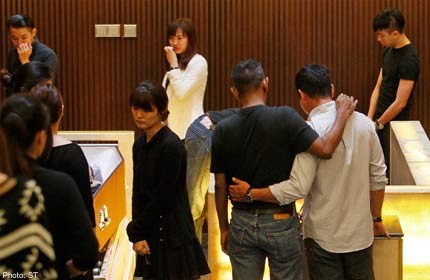 SINGAPORE - Their caskets rested next to each other as relatives and friends bid a final tearful farewell Monday morning at the Mandai Crematorium.

This was the tragic end for the Korean victims of last Friday's horrific Central Expressway (CTE) car crash.

Even as the victims' relatives and friends, some of whom had flown in from South Korea, mourned their loss, others called for tough action against reckless drivers.

Some motorists, angry with drivers brazenly racing on busy roads, have posted videos online calling for the police to take action.

One speedster who had posted a video of himself racing was outed by a netizen who posted the speedster's registration details.

Member of Parliament for Marine Parade GRC, Ms Tin Pei Ling, who is also a member of the Government Parliamentary Committee for Home Affairs and Law, said: "Recent reports on traffic tragedies no doubt generated much anxiety for many Singaporeans and the Traffic Police needs to enhance its enforcement efforts diligently and fairly."

She said that "even one fatal accident is one too many, as it is heartbreaking for victims' family members".

He said: "The penalty can be enhanced to deter drivers from driving recklessly."

But the authorities need to budge too.

For example, he said, the Land Transport Authority should not put efficiency over safety.

Citing the case of the two young brothers killed by a cement truck in Tampines earlier this year, Mr Baey said: "By barring heavy vehicles from the expressways to help traffic flow, it forces them to take the smaller roads through the residential areas, posing a hazard too."

The 34-year-old driver arrested by police for dangerous driving causing death. The driver has been released on bail and his licence suspended.

Many are calling for tougher penalties for drink driving, but it is not known if the driver was driving under the influence of alcohol.

However witnesses said the car he was driving was seen swaying just before it crashed into Mr Amron's car, which was parked on the chevron.

Police said investigations are ongoing, but declined to say if the driver was subjected to a breathalyser and blood-alcohol test after the accident.

Even so, it is time for zero tolerance with drink driving, argued editor of motoring magazine Torque, Mr David Ting.

"Our current drink-driving penalties are not heavy enough," said the 39-year-old editor.

"When you get behind the wheel to go drinking, you make that decision when you are sober. You know very well what you are doing and that is inexcusable."

Dr Lam said: "The culture of not operating a vehicle when drinking must be inculcated in all drivers; similar to the strict no alcohol rule for pilots of aircraft."

But MPs said that motorists have to also play their part.

Said Ms Tin: "All motorists and road users will also need to exercise greater caution and inculcate safe road habits. This will not only safeguard our own safety but of others whom we care about as well."

Associate Professor Fatimah Lateef, an MP for Marine Parade GRC and a trauma doctor, said she has seen her fair share of victims of reckless drivers.

She said there should not only be a change in the penalty but also enhanced education and awareness.

"Safe driving messages should not only be designated to festive seasons but all year round.

"Drivers have to take responsibility and ownership while on the roads and not only slow down for the camera," she said.

With three coffins laid in a row in front of the service hall, eldest son Song Seong Hwan, 30, broke down.

His younger brother, Jihwan, 28, and relatives from South Korea, went from his father's coffin on the left to his mother's and finally his sister's, speaking to them in Korean.

They cried as they reached out to touch the faces, and kissed them goodbye for the last time.

Summing up the tragedy that befalls those who die at the hands of reckless drivers, Mr Song said in his eulogy: "I lost my mother, father and my sister. I will go back to Korea. Let's cherish them in our hearts."

Their ashes will be taken back to South Korea.