Mr Lee Kuan Yew 'an admirer of US, but not afraid to criticise it' 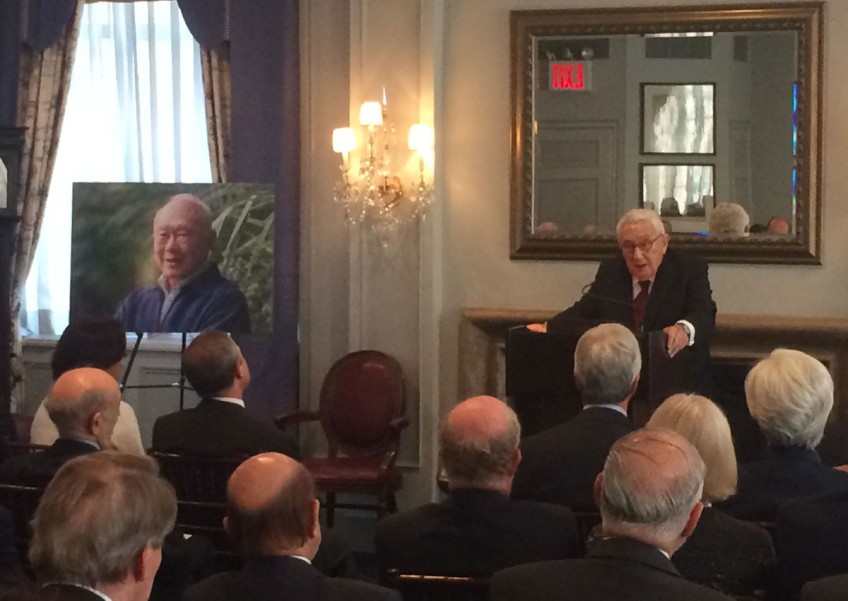 The late Mr Lee Kuan Yew was a lifelong admirer of the United States, but not an uncritical fan of the superpower, said Prime Minister Lee Hsien Loong yesterday.

In a message read out at a private memorial service in New York City for Mr Lee, who died in March aged 91, PM Lee said that Singapore's founding father "understood the vital role of American leadership".

"He knew that without the US presence, there could be no stability or prosperity in Asia. It was a view he steadfastly held for the rest of his life."

The memorial service was organised by former US treasury secretary Robert Rudin and hedge fund billionaire Ray Dalio, and attended by luminaries like former secretary of state Henry Kissinger, a close friend of Mr Lee's, and former US ambassador to Singapore Jon Huntsman.

PM Lee's message was read out at the service by Singapore's ambassador to the US, Mr Ashok Mirpuri.

Every trip that Mr Lee made to the US - during which he met not just political leaders and their aides, but businessmen and captains of industry as well - "brought him new insights and increased his admiration for the US system", said PM Lee.

Mr Lee admired America's faith in free enterprise and open competition, and its ability to attract talent; its openness and inclusiveness made the US economy and society the most dynamic in the world, he believed.

"He was grateful for the generosity of the American spirit, which made US dominance in Asia a benign and welcome source of stability and prosperity for so many Asian countries," said PM Lee.

"Even when America experienced crises and downturns, Mr Lee never wavered in his confidence that American creativity and resilience, its ability constantly to reinvent itself, would enable the US to overcome any challenge and retain its leadership role in the world."

But Mr Lee was not an uncritical fan of the American system, said PM Lee.

He differed with conventional American wisdom, especially on the role of the media as a fourth estate, and the relevance of Western liberal democracy in Asia.

He believed that a wealthy and mature nation like America could "roll" with the peculiarities of its system, but that it could not be replicated wholesale in Singapore, or other countries, which had to find their own ways.

"Not everyone would concede the argument, but he persuaded many Americans that he spoke from experience and conviction, and that he had a point.

"It earned him many admirers, even among those who did not fully agree with him."

On a personal level, the openness, warmth and generosity of the American people left the deepest impression on Mr Lee, said PM Lee.

Throughout his life, from a two-month sabbatical in 1968 at Harvard, to numerous work and personal visits, Mr Lee's American friends "opened their minds and their hearts to him, and brought him into their personal worlds".

"Over the years, Mr Lee made a great many friends around the world, but his American friends counted amongst those who meant the most to him," said PM Lee.

Thanking the gathered guests, PM Lee said that the memorial service would also be appreciated by Singaporeans, who have mourned Mr Lee deeply.

"He was not a sentimental man, but I know he would have been deeply honoured and touched by your presence," concluded PM Lee.

"On that trip in 1967, President Lyndon Johnson presented Mrs Lee with a jewellery box. Mrs Lee kept the box, and stored in it among other things the namecard of a bicycle shop. This was no ordinary bicycle shop. It was the cut-out address for Mr Lee's contact with the Plen. The Plen, short for Plenipotentiary, was the name Mr Lee gave a senior underground leader of the Malayan Communist Party who had negotiated with him, ultimately fruitlessly. Now that it is 2015, I guess you can say that the US succeeded in containing communism in South-east Asia... I remember one souvenir my father brought home from his 1967 trip to the US. It was a gift from LBJ, a portable turntable with vinyl LP records of George Gershwin's music, including the Rhapsody In Blue and An American In Paris. I am not sure we made much of this sample of American technology and culture at the time, but looking back, that gift symbolised America's spirit of dynamism, spontaneity, generosity and warmth - the American values that my father greatly admired all these years.. '' - PRIME MINISTER LEE HSIEN LOONG, on the two souvenirs President Lyndon Johnson gave Mr and Mrs Lee Kuan Yew on his first official visit to the United States in 1967

"Every trip Mr Lee made brought him new insights and increased his admiration for the US system. He admired America's faith in free enterprise and open competition. He spoke highly of your country's ability to attract talent, and your inclusiveness and openness which made the American economy and society the most dynamic in the world. He was grateful for the generosity of the American spirit, which made US dominance in Asia a benign and welcome source of stability and prosperity for so many Asian countries. Even when America experienced crises and downturns, Mr Lee never wavered in his confidence that American creativity and resilience, its ability constantly to reinvent itself, would enable the US to overcome any challenge and retain its leadership role in the world... A politician does not often have the opportunity to form deep friendships.Indeed it is said that in statecraft there are no permanent friends, only permanent interests. But Mr Lee had many old and trusted American friends, and saw the US as a strategic friend of Singapore. Thank you all for the friendship and hospitality you showed towards him.'' - PM LEE, on Mr Lee's admiration for the United States and his deep friendships with Americans, though he disagreed with some practices