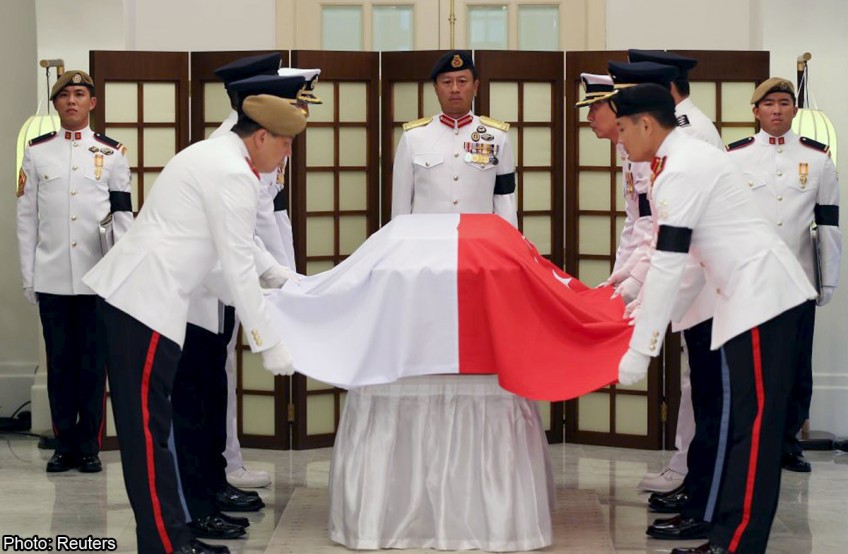 PROCESSION: The State Flag is laid over the coffin of the late first prime minister Lee Kuan Yew in Sri Temasek.

From all walks of life, people came together yesterday to bid farewell to Singapore's founding father and first prime minister.

Thousands of people turned up, many of them early, to get the best vantage points on the pavement along the 2km barricaded route.

They were there to witness a gun carriage, bearing Mr Lee Kuan Yew's casket, make its way from the Istana to Parliament House.

He died on Monday.

It did not matter that the procession, which moved from Orchard Road through Bras Basah Road and North Bridge Road, took only about 10 minutes.

The first person in the queue reached the Istana by 5.30am.

Ms Angela Tan, 50, a businesswoman, said: "Mr Lee's death is a great loss to Singaporeans. He was a well-respected man."

Retiree Adeline Choo, 53, who arrived at 7.45am, said: "I am usually very apathetic about local politics, but I had to come and pay my last respects because Lee Kuan Yew was more than a politician.

"He was not just human, he was like our superhero."

Over at Parliament House, where the gun carriage was not expected to arrive until 9.30am at the earliest, a son and a mother had taken up their positions across the road at 6.45am.

Mr Lai Chin Beng, 47, who is unemployed, and his mother, 75, started walking there from their three-room HDB flat in Redhill at 4am.

He said in Mandarin: "My mother really wanted to be here and she insisted that we set off from home early. Since there were no bus services at that time, we decided to treat it like a morning exercise."

Madam Goh Ah Choo offered a toothless smile, then said in Hokkien: "Mr Lee was a good man. If not for him, Singapore would not be what it is today. For all that he has done, he is definitely worth the time and effort."

Many went clutching bouquets or stalks of flowers. Others carried placards bearing Mr Lee's face or handmade cards and drawings. It was their chance to show their love and respect, they all said.

Even as more people filled the area, the crowd remained orderly. No one shoved or jostled for space.

People also made way for the elderly and those with walking aids or in wheelchairs.

Conversations were carried out in hushed tones.

As the time drew closer to the procession, a sense of anticipation filled the air.

Those who could not make their way to the procession had their eyes glued to television sets for the live broadcast. Others checked their mobile devices for updates on social media platforms like Twitter and Facebook.

At 9am, the coffin-bearer party carried Mr Lee's casket, which was draped with the State Flag, onto the gun carriage.

The mood was serene as the procession walked slowly down the tree-lined road on the Istana grounds as the Singapore Armed Forces Band played Beethoven's Funeral March No. 1.

The carriage passed a military Line of Honour made up of 48 personnel from the Singapore Armed Forces Military Police Command.

Also present were 20 representatives from Tanjong Pagar - a constituency Mr Lee had represented as Member of Parliament since 1955 - and Teck Ghee, which is PM Lee's ward in Ang Mo Kio GRC.

When the carriage came to a stop at The Istana Plaza, a bagpiper from the Singapore Gurkha Contingent played Auld Lang Syne.

As the gun carriage reached the main gates of the Istana, the silence turned into unrehearsed chants of "Lee Kuan Yew, Lee Kuan Yew" and "MM Lee, we love you", accompanied by loud applause.

There were red eyes and tears among the people. Many craned their necks for a better view and snapped away with their cameras or mobile phones.

It was a moment they wanted to capture for posterity.

The same scenes were repeated as the carriage reached North Bridge Road.

People, who had been quiet, joined one another in a spontaneous outpouring of emotion, calling out "Lee Kuan Yew, Lee Kuan Yew".

The public can pay their last respects to Mr Lee at Parliament House, which will be open 24 hours till Saturday, 8pm.

On Sunday, Mr Lee will make its final journey to University Cultural Centre in the National University of Singapore for a State Funeral Service and then to Mandai Crematorium for a private cremation.