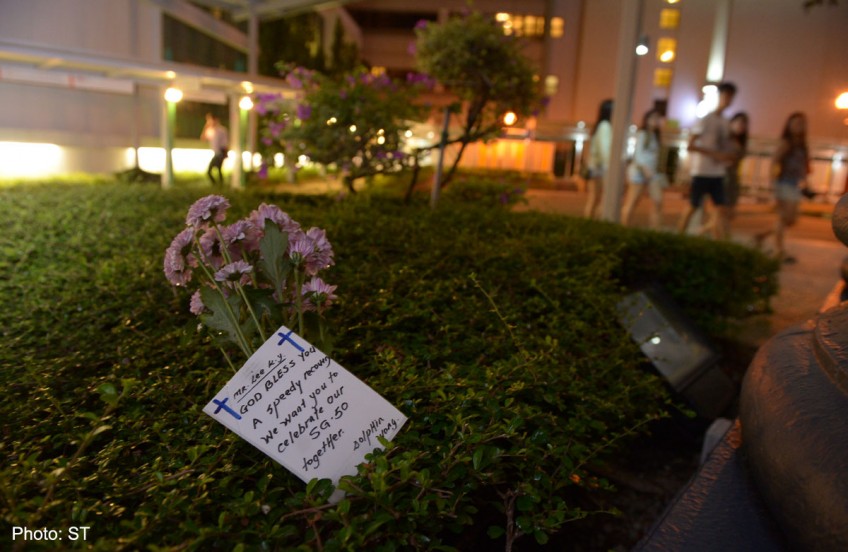 Former prime minister Lee Kuan Yew remained critically ill in hospital for a third day yesterday, as the police warned against spreading falsehoods and said they would relentlessly track down those who doctored a government website to spread false information about Mr Lee.

Meanwhile, get-well wishes poured in from people in Singapore and abroad. Many from overseas expressed their concern for his health on social media and wrote admiringly of his leadership.

"Mr Lee laid the foundations for Sino-Singapore bilateral ties and actively advanced mutually beneficial bilateral co-operation. He made important contributions to the progress of bilateral ties," he said.

Mr Lee, 91, has been in intensive care at the Singapore General Hospital (SGH) since Feb 5, when he was admitted for severe pneumonia.

Yesterday, the scene at the SGH lobby was quite unlike that of the previous evening, when crowds gathered after the Government announced that his condition had deteriorated further.

But a few members of the public felt compelled to linger a bit.

They included Mr Lionel de Souza, 72, the vice-president of Singapore Police Retirees' Association, who was in Mr Lee's team of bodyguards when Singapore separated from Malaysia in 1965.

"He's been very kind to me. Every year, he sends me a letter he personally signs when I wish him happy birthday," he said.

"He's a good man. He had to act in that way in those days. We had nothing in Singapore. If not for him, I'd probably be a foreign worker digging a drain in another country.

"We're lucky we had a leader who worked together with a good team, and here we are today. I'm happy. So I come here to say a little prayer for him," he added.

Retiree Teo Kwee Lock, 67, who travelled from his home in Bedok to SGH, said he was grateful to Mr Lee for Singapore's sound policies and rule of law.

Earlier in the morning, the police told The Straits Times that they take "a very stern view against anyone who doctors a government website to spread false information to deceive the public".

Assistant Commissioner of Police Melvin Yong was referring to a hoax website with the logo of the Prime Minister's Office which announced on Wednesday night that Mr Lee had died.

Mr Yong, director of the police public affairs department, said: "We will spare no effort to bring them to task. We also advise the public not to spread falsehoods."

In a Facebook post early yesterday morning, Ms Ho Ching expressed hope that the fake news would be "clearing off the airwaves" and thanked everyone for their prayers.