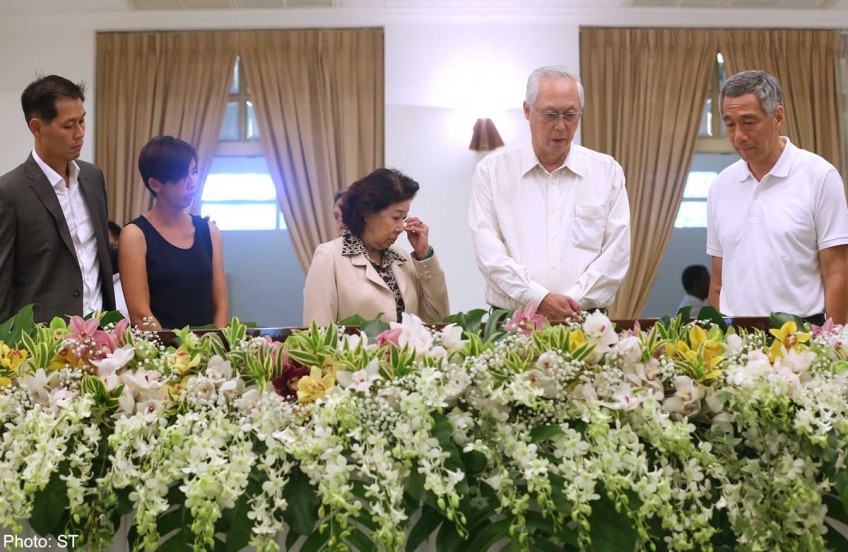 In a letter to the late Mr Lee's son, Prime Minister Lee Hsien Loong, Mr Goh wrote: "Your family has lost its patriarch, and Singapore its key founding father. We share your grief, and can only offer you and your family our profound condolences.

"Mr Lee Kuan Yew dedicated his life to Singapore. He lived and worked to build a nation and to advance the well-being of Singaporeans. For many Singaporeans - members of the pioneer generation, in particular - he will forever be in our grateful hearts. He gave us a country we can be proud of, a home to bring up our family and a better life we can aspire to."

Mr Goh, 74, said he regarded Mr Lee as his mentor, who had helped him succeed as prime minister after he took over the position from Mr Lee in 1990.

He wrote to PM Lee: "Outside your family, I probably have benefited more than anyone from his guidance and advice. He helped me succeed as prime minister. We enjoyed a warm relationship. Until his health got in the way, we saw each other regularly and had lunch fortnightly."

Mr Goh had last seen Mr Lee on Feb 5, when he had been admitted to the intensive care unit at the Singapore General Hospital with severe pneumonia, which finally claimed his life.

"It pained me to see him sedated and unaware of his surroundings," Mr Goh wrote.

He also recalled how devastated Mr Lee had been to learn of PM Lee's diagnosis with lymphoma during an official visit to South Africa in 1992, calling him immediately to discuss treatment for PM Lee, then 41 and deputy prime minister and minister for trade and industry.

"Outwardly however, Mr Lee braved on with little hint of his personal emotions to his hosts. His stoicism and message were clear - we must not be deterred, however daunting life's interventions," Mr Goh wrote.

"Your father's personal virtues, morals and habits - integrity, resilience, hard work, discipline, frugality, daily exercise, to name a few - are legendary, as are his demands of high standards of performance. Much of today's 'Singapore DNA' can be traced to his personal character, philosophy and values."

Mr Goh encouraged PM Lee to take heart from Singaporeans' respect and gratitude towards Mr Lee, to carry on with his late father's work.

"As Prime Minister, you lead a nation in mourning the demise of its greatest son, even as you grieve the passing of your father.

Condolences cannot erase the pain of your bereavement. May Singaporeans' deep respect for your father and their gratitude for his lifelong service to our nation give you the strength to continue his life's work of making Singapore strong, secure and prosperous," Mr Goh wrote.