Mr Lee's funeral procession will start at 12.30 on Sunday and be telecast live 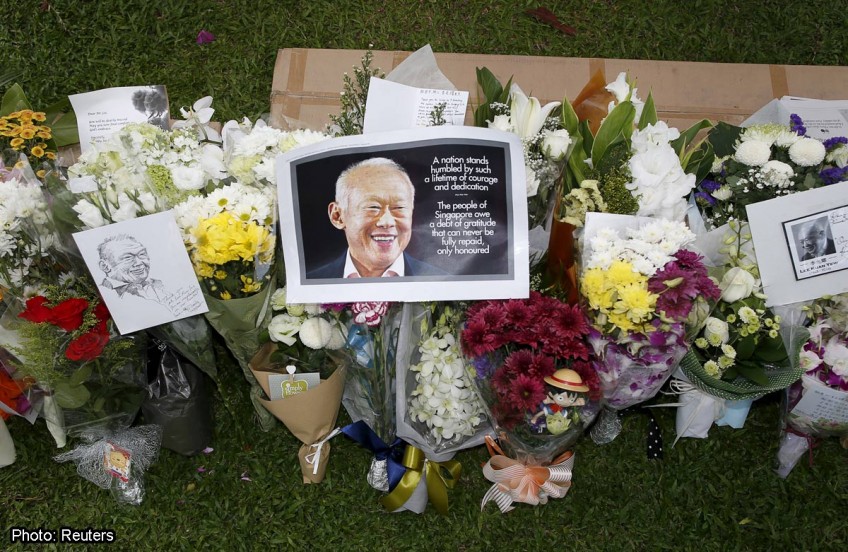 SINGAPORE - On Sunday, the State Funeral Procession of Mr Lee Kuan Yew will commence at 12.30pm and be telecast live on national television and online media.

Mr Lee's body will be taken from the Parliament House to the University Cultural Centre (UCC) on Sunday (Mar 29), National University of Singapore where the funeral service will be held from 2pm to 5.15pm.

The Procession will cover a distance of 15.4km and pass significant landmarks, such as Old Parliament House, City Hall, the Padang, NTUC Centre and Singapore Conference Hall; as well as heartland areas, said the State Funeral Organising Committee.

Members of the public can line the route from Parliament House to UCC.

The telecast will be available on television, radio and available online at www.rememberingleekuanyew.sg.

The Funeral Service at UCC will be attended by members of the late Mr Lee's family, the President of Singapore, Cabinet Ministers, the Judiciary, Members of Parliament, and foreign leaders.

Singaporeans from all walks of life will also attend the Service.

The Master of Ceremony will be Peter Ong, Head of Civil Service. Ten eulogies will be delivered in the following order:

On the conclusion of the Funeral Service, the late Mr Lee will make his final journey to Mandai Crematorium.

The cremation service will be private.

[[nid:183668]]
SUBSCRIBE TO OUR NEWSLETTER
Your daily good stuff - AsiaOne stories delivered straight to your inbox