In Mr Lee's later years, the world turned to him as seer and sage 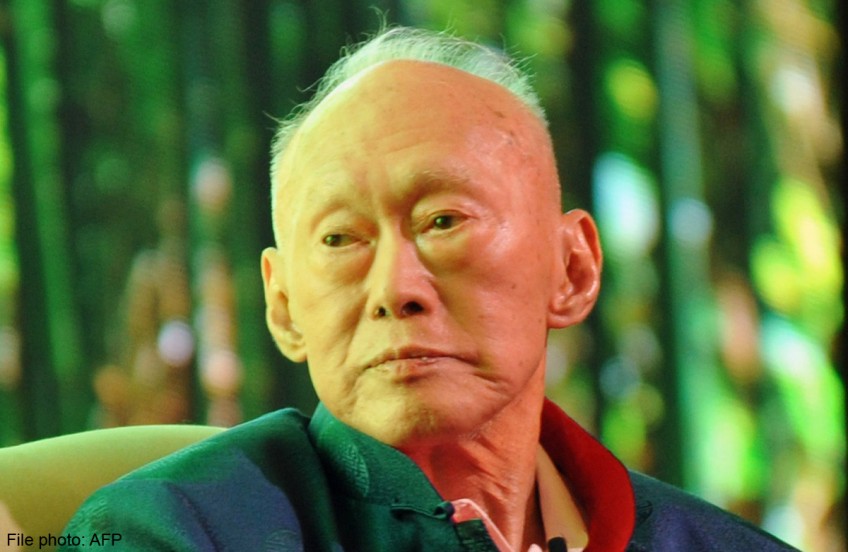 Perhaps this article should begin with Henry Kissinger, the guru of realpolitik who was secretary of state to United States president Richard Nixon and shared a long association with Mr Lee Kuan Yew.

Perhaps with the words of another lifelong friend of Mr Lee's, former German chancellor Helmut Schmidt, or Britain's Margaret Thatcher.

But that would be all too predictable.

So let's start with what an African American cabby in a city not known to have a particularly deep interest in the wider world had to say about Mr Lee.

It was 1998 and, visiting New York, I was in a yellow top from my hotel near Central Park to catch up with friends at a micro-brewery pub off Times Square. The driver was an emigre from Nigeria and, as in the manner of cabbies everywhere, curious to know more about his ride.

When he heard I lived in Singapore, he chuckled loudly.

"Hey, you are the guys who caned the American kid," he said. "You stood up to President Clinton and you did damn right. Who's that old man who runs your country - Lee?"

He was referring to Singapore's punishment, in 1994, of teenager Michael Fay for vandalism. After then President Bill Clinton intervened, Fay's caning sentence was reduced from six strokes to four.

Singapore's decision to go ahead with the punishment made headlines around the world. Annoyed at the island's steadfastness, Washington voted against plans to hold the inaugural meeting of the World Trade Organisation in Singapore.

In many ways, the Fay incident and how it was received abroad underscores the world's perception of Mr Lee and the foundations on which he built Singapore.

Intellect and integrity, common sense above compassion, inclusiveness in domestic and foreign policy, a practical, non-ideological approach to issues, an unwavering commitment to globalisation and free markets, and a firm determination to enforce the rule of law - these are the qualities the world came to recognise in Mr Lee, and today, Singapore.

Some years later, when I was posted to India as the South Asia bureau chief for this newspaper, I would become aware that the world viewed Mr Lee's Singapore as more than an efficiently administered state - that it also stood for a healthy, throbbing habitat.

Outside a golf course in Greater Noida, a boom town in the notoriously poorly run state of Uttar Pradesh, I would frequently pass a billboard advertising a new, tree-lined condominium complex with plenty of water bodies. The promise was "Singapore-style living".

Without question, the reputation of an irascible, combative, Western lackey preceded the hallowed image of the sage and seer Mr Lee bore in his later years.

In the post-colonial era and its emphasis on non-alignment and suspicion of Western multinationals, his hard-nosed, contrarian approach and his open welcome of foreign investment evoked much disdain.

"Lee is like a banana - yellow of skin, white underneath," then Chinese Premier Zhou Enlai complained at the Bandung Conference in 1955, echoing the Chinese view of the time.

A quarter-century later, the Chinese leadership would instruct rising party figures to travel to the island to study its growth and governance model.

In 2012, no less than President Xi Jinping ordered China Central Television to produce a series on Singapore.

From the mid-1970s, global companies such as Silicon Valley legend Hewlett-Packard, Seagate, DuPont and Sony would arrive in droves on an island with few resources except having a good location in South-east Asia and a clean, efficient government run by Mr Lee.

The jobs they provided and the technology they brought elevated Singapore to new heights - which was precisely why Mr Lee had invited them.

In 1999, Mr Lew Platt, retiring as chairman and chief executive of Hewlett-Packard, made a farewell visit to Singapore with his successor Carly Fiorina.

As always, they used the opportunity to touch base with the leadership here and exchange ideas.

"He is a mensch," Mr Platt told me later of Mr Lee, using the Yiddish word for a wise man who radiates fortitude and firmness of purpose.

The fortitude, which rose from deep conviction, came with a price on occasion. Mr Lee, it was well-known, was prone to hectoring his interlocutors, especially when he believed they were under-performing in their potential, either as individuals or as leaders.

The Malaysians, particularly, did not take it well and it continues to rankle with the old guard.

Several years ago, in a blog posting, former Prime Minister Mahathir Mohamad called Mr Lee a "little emperor... who likes to lecture us on how Malaysia should be run".

Mr Maurice Baker, one of Singapore's first-generation diplomats, once told me of a time he had arranged a visit to Singapore by then Malaysian Deputy Prime Minister Musa Hitam, at a time of particularly prickly ties.

Mr Baker, then High Commissioner to Malaysia, had sent word ahead that Mr Lee must be careful to hold himself back and give Mr Musa a good hearing.

"Musa came back fuming," Mr Baker recalled. "Rather than listen, LKY had given him a long lecture."

Another person he rubbed the wrong way was Mrs Indira Gandhi, the Indian prime minister who was so powerful in her time that some worshipped her as the incarnation of the demon-slaying Hindu goddess Durga.

In the early 1980s, on the sidelines of a multilateral meeting in New Delhi, Mr Lee, who had a long association with the Nehru-Gandhi family, is said to have pressed Mrs Gandhi to roll back her socialist policies.

He thought India was best served by building a free-market economy that would propel the country to the heights he thought it could achieve. Mrs Gandhi is said to have responded frostily, causing a slight chill in an old friendship.

In later years, Mr Lee, watching China's rise and frustrated by the slow-footedness of the South Asian giant in catching up, was often publicly critical of India's tedious democracy, massive bureaucracy and litigious society that he thought held back the country.

Years later, a successor Congress government would set in motion policies that would open India's economy, spur growth and place it on the world stage as an emerging power.

And in 2005, the Indian government would honour Mr Lee by asking him to deliver the Nehru Memorial Lecture where he announced that he had revised his view of India.

Speaking at the function, Congress party chief Sonia Gandhi turned to him and said: "Mr Lee, we in India have listened to you with great respect - even when you were critical of us."

Little surprise that when her son Rahul, seen as a potential prime minister himself, decided to enter politics, he came to Mr Lee for advice.

Some say his decision to bide his time while building the Congress organisation from the grassroots up is based on advice from Mr Lee.

By the turn of the century, Mr Lee's reputation as a clear-headed visionary had encompassed the globe.

From Mr Nixon to Mrs Thatcher and the two Bushes who occupied the White House, all had turned to him as a trusted resource on the great changes in Asia, particularly China.

It was perhaps his measured analysis and deep insights that helped the Western world accept the rise of China without feeling undue unease or a need to block it.

At a White House meeting in October 2009, President Barack Obama hailed Mr Lee as "one of the legendary figures of Asia in the 20th and 21st centuries".

Perhaps most satisfying for Mr Lee would be that he lived to see the Western media's sniping at him, and Singapore, turn to grudging respect, even admiration.

Singapore's tough position on long hair, chewing gum and its "fine city" reputation gave plenty of grist to the mills of the global media.

As recently as August 2002, New York Times columnist William Safire, criticising Bloomberg News for settling a libel lawsuit brought by Mr Lee, sniped that Singapore was "an island I cannot visit because I like to chew gum and don't want to risk a caning for it".

But that would change, particularly as Mr Lee stepped down at the height of his power, signalling to the world his belief in planned transitions.

In December 2005, Time Magazine Asia, after interviewing him for more than five hours, put him on the cover as "the man who saw it all".

"Everybody who lives in Asia today thinks they are watching history being made," the Time editors wrote.

"Lee Kuan Yew is one of those who can say, without fear of contradiction, that he helped make it."