Mum gets 4 years for baby's death 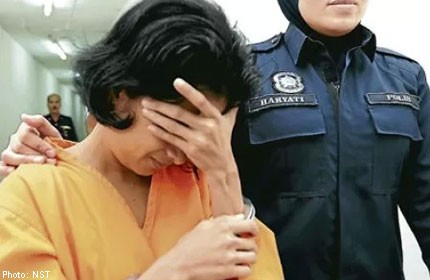 KUCHING - The magistrate's court here sentenced a mother to four years' jail for causing the death of her 9-month-old child earlier this month.

In passing sentence, magistrate Zulhairil Sulaiman, after hearing her guilty plea, ordered that Melissa's jail term to start from the date of her arrest.

Zulhairil said as a mother, the accused should have been more responsible to prevent such an incident.

"I hope this sentence will serve as a lesson to her and the public in general," said Zulhairil.

After the sentence was read, Melissa cried in the witness stand and later banged her head several times against the wall as she was taken to the lock-up.

Based the facts of the case, the accused's 29-year-old sister, Dalilah, had found bruises all over Danish's face, chest and abdomen after Melissa ran away from her home in Kampung Seratau to a house in Mile 13, Jalan Kuching Serian on June 16.

Danish was later taken to Sarawak General Hospital and warded in the intensive care unit, where doctors found the child had been neglected and malnourished.

The accused had run away from her home following abuse by her husband.