Mum of girl, 4, who died after getting hit by car in Bukit Batok: All mothers have a sixth sense

The mother of four-year-old girl Eleanor Tan, who died after being bit by a car at Bukit Batok Central on Monday (Oct 9), had been preparing her daughter's favourite meal of steamed eggs during the accident.

Eleanor was conveyed unconscious to Ng Teng Fong General Hospital where she later succumbed to her injuries.

A 37-year-old woman, understood to be the family's domestic helper, was also conveyed conscious to the hospital. 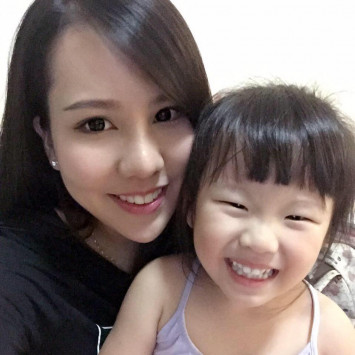 However Eleanor told her that she wanted steamed eggs, and the domestic helper did not know how to prepare the dish, so Ms Wong stayed home to cook instead.

Ms Wong said: "All mothers have a sixth sense.

"The whole time while I was cooking, I felt disturbed.

"When I received a call from the hospital, I thought initially that my daughter was just injured.

"Only when my husband and I reached the hospital did we realise that she was gone.

"I kept thinking to myself then that this wasn't real, and I must be dreaming."

According to a passer-by, when the car collided with Eleanor and the domestic helper, the impact cracked the front windshield of the vehicle.

Both Eleanor and the maid were tossed into the air and hit the rear windscreen of the vehicle as they landed.

Traces of blood were left behind at the scene after the accident.

A witness to the accident, Low Ko Chim, 63, was sitting outside his shop at Block 644 Bukit Batok Central when he heard a crash.

He rushed over to investigate and saw Eleanor and the maid lying on the road, a few metres apart.

"I went down to see if I could help because I know some first aid from when I was in the St John's Ambulance Brigade."

Mr Low kept the domestic helper conscious by talking to her as they waited for the ambulance to arrive.

He told The Straits Times that people often jaywalked along the stretch of road where the accident happened.

Another witness, Dr Stanley Peck, 48, was in his clinic attending to a patient when he was alerted to the incident.

He rushed down to the scene with an emergency kit where he performed chest compressions on the unconscious Eleanor.

Nurses from another clinic also attended to Eleanor with an oxygen mask and intravenous drip.

According to Dr Peck, Eleanor did not have a pulse.

Her head was also bleeding and there were bruises on her legs.

In response to media queries, a police spokesman said that the police were alerted to the accident at 6.41pm which happened in the direction of Bukit Batok West Avenue 2.

A 53-year-old driver was arrested for causing death by a rash act.