Nations team up against terrorism at sea 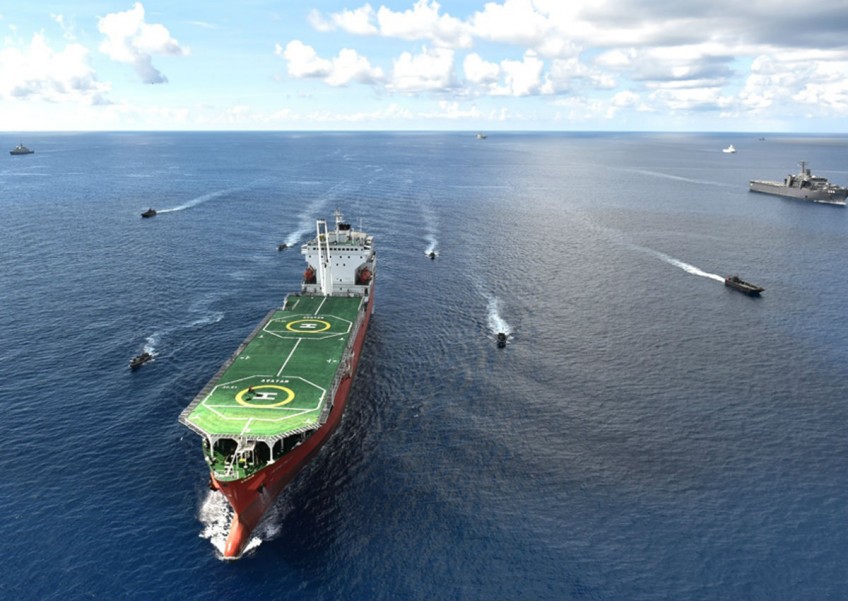 ASEAN, Asian countries, Russia, Australia, NZ and the US in joint ops against maritime threats

The Singapore leg of a multinational military exercise kicked off yesterday as task forces intercepted and stormed a merchant vessel hijacked by "terrorists" at sea.

The action-packed operation was part of the ASEAN Defence Ministers' Meeting (ADMM)-Plus Maritime Security and Counter-Terrorism Exercise, which started last Monday in Brunei. It will end on Thursday in Singapore.

The 11-day drill, which involves realistic sea- and land-based scenarios, aims to strengthen the capabilities of participating militaries in tackling terrorism and maritime threats.

Participants include the 10 ASEAN nations, Australia, China, Japan, India, the Republic of Korea, New Zealand, Russia and the United States.

The inaugural ADMM-Plus convened in Vietnam in 2010, with the goal of boosting security and defence co-operation among ASEAN countries and their partners.

Working groups were set up in various areas of co-operation, which include maritime security and counter-terrorism.

This is the fifth ADMM-Plus field training exercise. The first was held in 2013 and focused on humanitarian assistance and disaster relief and military medicine.

This is the first time that the ADMM-Plus' maritime security and counter-terrorism working groups are collaborating in an exercise.

Its joint operations director Brigadier-General (BG) Desmond Tan, 45, said such a collaboration is important as terrorism can occur out at sea.

"This has the added advantage of (adding) more relevance and realism to the exercise, (as) terrorism and maritime security are sometimes intertwined," said BG Tan.

He added that collaboration allows for a wider scope of interaction among the troops.

"I think we all recognise that these are transboundary challenges that no one country can tackle by itself," he said.

After tracking down the vessel, four teams from Brunei, the Republic of Korea, Singapore and Thailand stormed the vessel using rigid-hull inflatable boats, while two teams from Singapore rapelled onto the vessel from Super Puma helicopters.

The hijackers were eventually subdued and the hostages rescued.

BG Tan acknowledged that the multinational nature of the exercise has brought challenges arising from the participants' different languages, cultures and tactics.

But he stressed: "This is exactly the purpose of this exercise - to bridge some of these challenges and to allow the various countries... to come together to exercise and to understand each other better and to build trust and confidence."