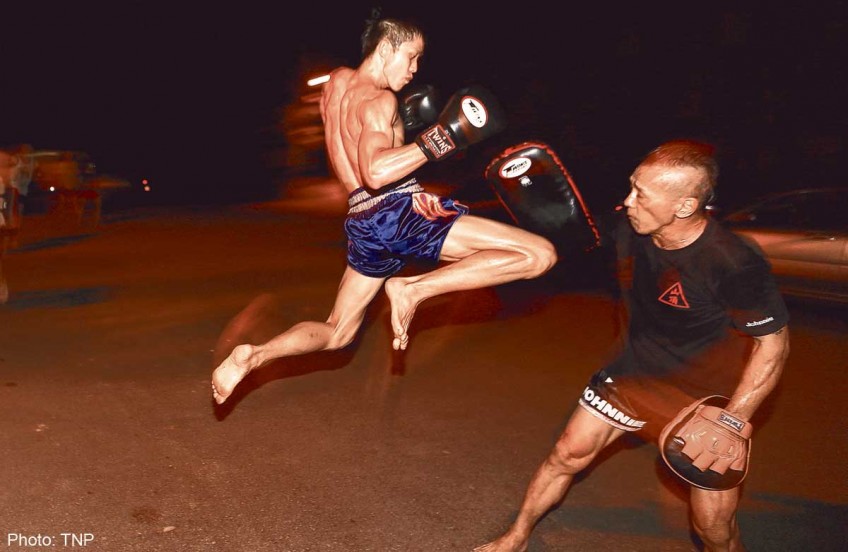 Civil servant Wilson Lau (in blue shorts) has been training under 62-year-old Master Johnnie Yeo (in black) for six years.

SINGAPORE - If you live in Bukit Batok, some nights, you may see a stream of martial artists carrying their gear and pads deep into the woods of the nearby nature park.

If you strain your ears, you may even hear shouts and screams of what sounds like a fight going on.

No, it's not a secret Fight Club that is being convened at Bukit Batok Nature Park.

The sounds are from the muay thai students of Master Johnnie Yeo, 62, who train under him in the park, surrounded by trees.

Master Yeo, who studied the Thai martial art for more than a decade in Chang Mai, has been holding muay thai classes here for over 20 years.

He told The New Paper that when he was a child, his parents sent him to study muay thai as a form of discipline because he was mischievous.

When he returned to Singapore, he was approached by a few friends to teach them the sport.

Master Yeo said: "I can relate to my students because I was once like them. They live under the misconceptions of being 'bad kids', but once they open up, it's easy to see that there is more to them."

By word of mouth, the group grew over time and now he has more than 200 students.

He chose this unique location for his class because he learnt muay thai the traditional way in Thailand, which meant using his natural environment as a gym.

As a young trainee, Master Yeo would condition his shin by kicking trees or rocks.

Miss Natalie Soh, a recent graduate from Nanyang Polytechnic, is one of the few female students.

The 22-year-old said she loves the training because of the fresh air and ambience.

She said: "We really have to go down to basics here. We always say: 'No pain, no muay thai'."

Legal executive Evon Wang, 25, who was introduced to muay thai by her boyfriend, found the traditional training style to be very fulfilling.

"Master Yeo also hits our shins with a bamboo stick in order to condition us. These are all not practiced in other gyms."

Her boyfriend, civil servant Wilson Lau, 28, has been training under Master Yeo for six years.

"It's like a family. Everybody here is so close. We enjoy what we do and we have outings together," he said.

[[nid:125249]]
SUBSCRIBE TO OUR NEWSLETTER
Your daily good stuff - AsiaOne stories delivered straight to your inbox