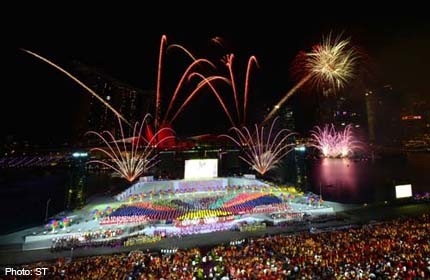 SINGAPORE - It may have been panned on forums and in the blogosphere, but this year's NDP theme song, One Singapore, received a much more favourable reception at the parade.

Parade-goers stood up and sang their hearts out, no doubt egged on by the carnival atmosphere and the 68-strong Sing-a-Nation choir made up of regular Singaporeans.

The chorus was especially a hit, with many admitting that it was quite the earworm.

"The O-o-o part kind of stays with you," said Mr Raymond Tan, 36, a customer service officer, with a smile. "The first time you hear it, you don't really take ownership of the song, but now I find it quite catchy."

Audience members told The Straits Times that hearing and singing it 'live' may have made all the difference. The theme song kicked off a medley that included evergreen favourites including Stand By Me and One People, One Nation, One Singapore, blended with pop ditties by Maroon 5 and Pitbull.

"The atmosphere of the parade definitely made the song better," said full-time national serviceman Hafiz Hussinee, 24, who attended the parade with his sister. "It's an upbeat song, and definitely translate better 'live'."

Some audience members like sales administrator Jocelyn Teo, 43, were still not convinced, but caught the parade bug nonetheless.

"I didn't really like this year's theme song, but seeing everybody sing and dance and make a go at it made me sing it too," said Ms Teo.

But while the song might have its detractors, there were also hardcore fans, like Greenridge Secondary student Crystal Tan, 15. "I was the only one who found it nice, all my friends said it sounded like a kindergarten song," said Ms Tan, who was at the parade with a classmate. A fan from the first listen, she liked that it was uptempo and easy to sing along to.

"When you watch the video at home, you don't have the feeling; here you can feel the beat, and it's really a celebration."

Go to The Straits Times Communities Entertainment for more stories.