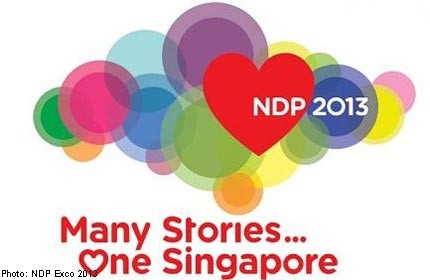 <p>In a televised contest, these 10 groups will battle it out to see which group gets to lead the whole choir during the NDP 2013 event at the floating platform at Marina Bay. Above: Photo of NDP last year.</p>

Singapore - This year's National Day Parade (NDP) theme song, One Singapore, is reflective of the diverse dreams and backgrounds of its choir members, said organisers in a statement on Tuesday.

The song was composed by NDP 2013's music director, Ms Elaine Chan and the lyrics were written by creative director, Ms Selena Tan.

The choir members at this year's event were chosen from a competition held in April where there were 200 participants vying for a spot. Ten groups, with two to 15 members in each group, will form the Sing A Nation choir.