Netizens pick on Singapore beauty pageant contestants over their looks

It's tough being a beauty contestant, whether you're drop-dead gorgeous or not much of a looker.

Invariably, there would be unkind remarks one way or another - from sexist ones to the downright crude at every contest.

The finalists of last Saturday's Miss Singapore Beauty Pageant were not spared either as they were mercilessly cut down by some netizens after a reportedly less-than-flattering photo of the group went viral over the weekend.

They criticised the girls for not having good looks and wondered if the contest was a joke.

Then they unleashed their barbs again today when the organiser put up a group photo of the girls after their hip-hop workout at a gym on the pageant's Facebook page. But the girls also had supporters from the internet who told them not to be disheartened as physical looks alone do not sum up the full meaning of being a beauty.

Well, it's understandable that most of the contestants might not look as stunning like those in Miss Universe or Miss World pageants which expect far higher standards. And the girls probably know that.

So why be so harsh on participants who were having fun in lesser-known contests, which also help to promote international friendships on smaller platforms?

To the girls, please have a swell time as you boost your fitness, confidence and deportment together. We love your enthusiasm. 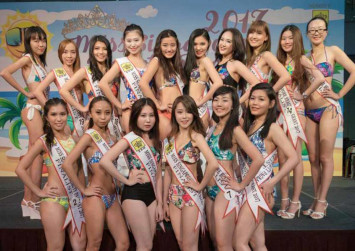