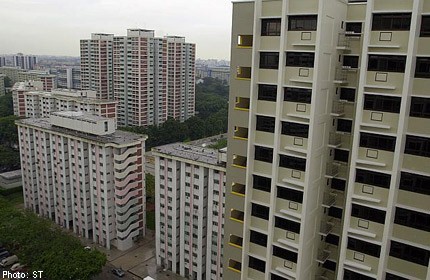 SINGAPORE - Living room too small? Knock down a wall and combine it with the bedroom.

This is one of the design elements the Housing Board plans to include in its newest two-room flats. This will give buyers, such as eligible singles and low-income households, flexibility in the use of its 36 sq m of space.

This was revealed in its response to The Straits Times' queries regarding last month's tender calling for contractors to build a mock-up for a new flat type at its research centre in Woodlands.

"In designing new two-room flats, we aim to achieve a layout that will not only improve the ease of construction, but also provide flat owners with greater flexibility in the use of internal space," a spokesman said. "For example, designing the bedroom and living room to be contiguous so that if required, the two spaces can be combined."

The size of the new flats, however, has raised concerns.

National Development Minister Khaw Boon Wan noted that these smaller flats would allow singles, who can also opt for the typical two-roomer - which is 45 sq m and cost about $100,000 - more choices to fit their needs and budget.

But SLP International's head of research Nicholas Mak, who estimates that new units will start from $80,000, believes singles might be turned off by the lack of space. He pointed out that they are smaller than private shoebox units, which are less than 50 sq m.

"Singles who entertain frequently, or have many material possessions will probably stay their hand. From an investment perspective, it probably won't be popular with families on the resale market," he added.

For the first time later this month, singles above 35 and earning less than $5,000 a month will be able to bid for Build-To-Order two-roomers in non-mature estates. Previously, they could only buy from the resale market.

"At this size, there's probably enough space just for a bed, a book case and a wardrobe," said single civil servant Fiona Tan, 42, who had been eagerly awaiting more details of the new flats.

"A home should be a refuge, not a pigeon hole."

Based on plans of the new flat, the cut in space seems to have come largely from the kitchen area, which has been shaved off to make it flush with the air-conditioner ledge outside the bathroom next to it.

"Most single friends I know go for larger three-room resale flats. But if space needs to be cut, the kitchen will probably be the first to go," said marketing executive Michael Chan, 36, explaining that many of his single friends prefer not to cook.

The HDB spokesman made it clear that the tender was part of its research into flat design and part of a "regular review to address the evolving lifestyle needs and preferences of flat buyers". More details for the new two-roomers will be announced when ready, she added.