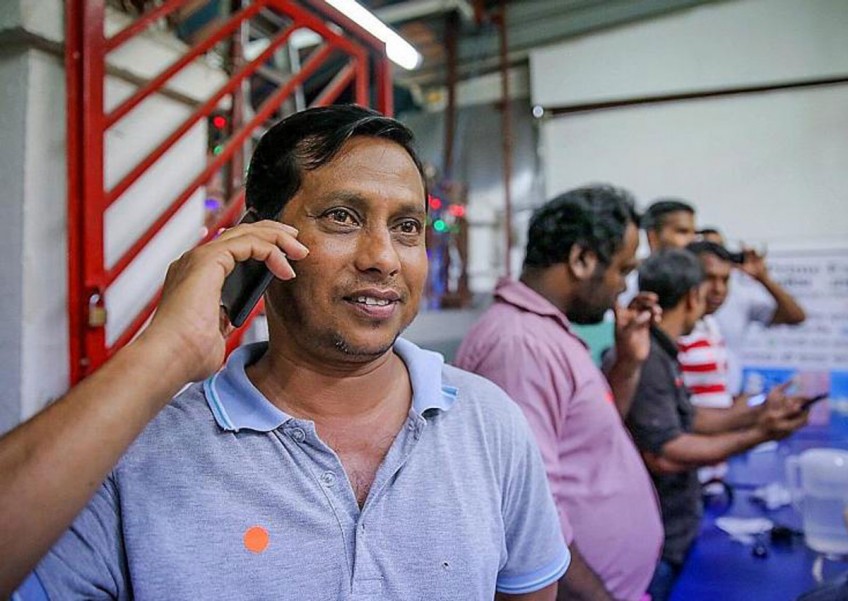 He has not seen his family for more than two years and does not even have their photographs with him.

But yesterday, Mr Khan Nasir Uddin, 44, was reunited with his family of four over a video call back in his rented room in Farrer Park.

The worker, who is from the Manikganj district in Dhaka, Bangladesh, said: "I was very happy to see my family."

But he received a 3G phone at a phone distribution event organised by non-profit organisation Transient Workers Count Too (TWC2) yesterday.

After it was announced that the 2G network would shut down next month, TWC2 collected around 300 phones for foreign workers.

Mr Ethan Guo, general manager of TWC2, said: "When we heard that the 2G mobile signal was about to be shut down, our immediate concern was how the migrant workers under our care would be able to afford a new 3G phone.

"A phone isn't a luxury for these workers. They need one to stay in touch with family back home and to be notified of appointments with the Ministry of Manpower or the hospital."

When asked why he did not bring his family photos over to Singapore, Mr Khan told The New Paper that his family cried when he had to leave, and he got distracted and forgot to take the photos.

Indian national Pandian Ramadoss, 38, a site and safety supervisor, told TNP that he has not seen his family for 1½ years and is excited to use his 3G phone to video-call them.

"I used to own a 3G phone and wanted to purchase another one after it was spoilt.

"But I injured myself before I received my salary so I couldn't afford another 3G phone."