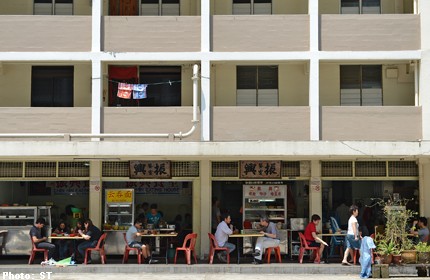 <p>Chin Hin coffee shop at Block 75 Commonwealth Drive. The eating place is set to close after more than 30 years in the neighbourhood, as residents at blocks 74 to 80 will be rehoused under the Sers programme.</p>

SINGAPORE - For years, residents in Strathmore Green and Forfar Heights have complained of a lack of amenities.

With no coffee shop or wet market in the immediate vicinity, the elderly face a 15-minute bus ride, sometimes while clutching their groceries.

Now, however, new shops, a minimart, an eating house and a supermarket are due to be built alongside two new public housing projects.

SkyVille @ Dawson and SkyTerrace @ Dawson will be ready by 2015, said a Housing Board spokesman.

Resident Catherine Lim, 75, told The Straits Times: "It will be nice to have a few more options nearby to cater to our daily needs."

Many of those living at Strathmore Green and Forfar Heights said they were rehoused over the past 10 years under the Selective En bloc Redevelopment Scheme.

They told The Straits Times that the lack of coffee shops and a wet market in their new neighbourhood had been a big headache.

Cleaner Kim Lee, 64, said the new high-density residential area relies on a handful of shops at nearby Dawson Place Shopping Centre, a two-storey HDB mall with a small food court and a FairPrice supermarket.

"The place is really lacking," she said in Mandarin. "Sometimes I can't get fresh produce because other residents have already snapped up the ingredients."

Residents can also take a 15-minute bus ride to the wet market and hawker centre at Block 159 Mei Chin Road.

But Madam Lim said that this is "troublesome" for someone her age, especially if she has to carry groceries.

The retiree added that she much preferred life in her former neighbourhood at Commonwealth Avenue.

"We had everything from cheap and good hawker food, provision shops, a tailor, salons and banks at our doorstep," said Madam Lim.

Mr Kwek Li Yong, the 24-year-old founder of civic group My Community, said important places in the estate had been demolished but not replaced fast enough.

He added that at least five hawker centres and markets had yet to be replaced, including the Princess Market and Food Centre.

"When we tear down these spaces, we are also reducing bonding opportunities among residents."

MP Chia Shi-Lu said there had been a "lag" between demolition and redevelopment but efforts had been made to cater to residents' needs.

He added that he was looking into arranging a shuttle service to make it easier for people to get to the Mei Chin Road wet market. He had also been liaising with government agencies and private businesses about developing the area.

Madam Tang Siew Noi, 77, hoped the new shops would come fast, adding: "I may not be around to enjoy the new amenities by the time they start building them."