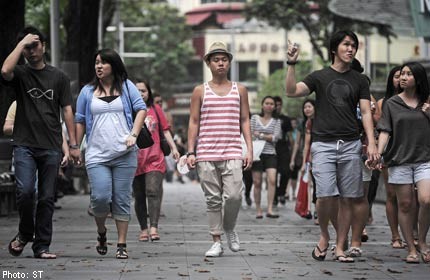 SINGAPORE - This year's National Day Rally was unusual in being less about saving and investing for the future than about spending for the present.

Unusual, in being a lot less focused on economic growth than on social equity.

And unusual too, in shifting the emphasis from the hard talk of self-reliance to the gentle assurances conveyed through phrases such as "don't worry" and "we're all in this together".

That was how Prime Minister Lee Hsien Loong chose to outline to the nation a new way forward that he said would see both the Government and community doing more to support individuals.

The shift is significant in three ways:

It acknowledges that not only the low-income but the middle-income groups too need more state support to own their homes.

It recognises that in health care, both individual savings and increased risk pooling to achieve universal insurance coverage are necessary.

It commits the Government to higher spending on an enlarged pool of those considered in need and deserving of help, and following from that, the prospect of higher tax burdens on those with income to spare.

What are the implications of this shift? And is this new course that Singapore has embarked on sustainable?

The rebalancing is in response to a changed context globally and locally. Technology and globalisation have caused income gaps to widen, replacing jobs and putting the squeeze on the middle class in developed countries.

As Prime Minister Lee Hsien Loong said, the fierce pursuit of capitalism has led to stark inequality with the incomes of those at the top "zooming away". At 0.47, Singapore's Gini coefficient - a measure of income inequality - is among the highest in the world.

And the trickle-down of wealth to the middle class has either slowed or stopped. In what has become known as the middle-class squeeze, an economy keeps growing overall but its rewards increasingly accrue to those at the top, as the Economist magazine put it, while wages for those on low to middle incomes stagnate relative to prices.

In Singapore, a fast-ageing population and shrinking families add to the stresses.

Veteran Member of Parliament Inderjit Singh says: "The rich and higher-income Singaporeans can afford a living in Singapore but the middle- and lower-income are stretching themselves. Singapore has become too expensive. So if we don't lift wages of the low- and middle-income, then someone has to pay for these things."

It is against this backdrop that the Government decided to move in the three key areas of housing, health and education.

It will extend a housing grant of up to $20,000 to middle-income buyers of four-room flats. The Government will ensure that a family on an income of $4,000 a month - about the median monthly household income for a first-time buyer of a four-room flat in a non-mature estate last year - will be able to afford a four-room flat comfortably.

In health care, the national insurance scheme MediShield will be expanded to cover all for life.

Education policy is moving in the direction of greater support for children from poorer, less privileged backgrounds and greater diversity across schools.

As PM Lee said, the old philosophy of "tough love" is no longer enough. "There are some things which individuals cannot do on their own, and there are other things which we can do much better together," he said.

"So we must shift the balance, the community and the Government will have to do more to support individuals. The community can and must take more initiative, organising and mobilising ourselves, solving problems, getting things done."

This new balance should not be about the Government acting alone, however, says Nominated MP Laurence Lien, who is also chief executive of the National Volunteer and Philanthropy Centre.

"In achieving real progress on social issues, the Government needs to involve citizens and the community more proactively in the hard and messy, but creative and opportunity-enhancing, work... otherwise, my concern is that there would be increasing over-dependency on the Government to fix every problem.

"I would like to see the community being equal partners in much of the upcoming work - not just to alleviate the fiscal burden, but also to contribute to the problem-solving process. It is not just about who pays the bills."

Even as the Government's latest moves to the left cause some to shift in their seats, economists point out that the ruling People's Action Party (PAP) holds fast to its long-standing belief in economic growth through an economy open to investments and foreign talent as the best means to create jobs and raise wages.

It is also unswerving in its belief that long-term planning remains essential to national success, and underlying that, its belief that one-party dominance in the political sphere is what makes that possible.

But within that context, how exactly this new social balance will end up is not yet clear to some observers.

Mr Manu Bhaskaran, chief executive and economist at Centennial Asia Advisors, notes of the new way forward mapped out by PM Lee on Sunday: "What we have got so far is a series of policy changes in response to specific but genuine concerns of the populace, on health, education and housing.

"It is an activist state, but an activist only in a few areas," he says. He notes that PM Lee steered clear of other redistributive measures, such as cash transfers like unemployment and pension benefits.

PAP MP Denise Phua believes that traditional "rules of engagement" in an evolving social compact need continued discussion. "It is obvious that much homework has been done on the side of the State, and it has more up its sleeves to do more in the coming years. But is it obvious to the other stakeholders - the community and the individual?

"What is the new social contract and is there one? Are there any changes to traditional underpinning rules of engagement such as self-reliance, family remains the first line of defence and work before welfare, for instance? "

As for fiscal sustainability, Dr Jeremy Lim, principal consultant of Insights Health Associates, says that while it is difficult to quantify that actual commitment and the budget impact of the health-care changes, "the new monies needed may not be as large as feared".

"I don't think the new commitments will add billions to the bill. Maybe tens of millions in terms of scale. I suspect many Singaporeans not included in MediShield etc are already utilising health-care services and showing up as 'bad debts', support from Medifund," he says.

But there have already been calls for more - a wider scope for Workfare, which supports low-wage workers through income supplements and training subsidies, and unemployment insurance as economic growth becomes more volatile and jobs less secure.

There is more room for taxes to be made more progressive with higher rates for the wealthy, and also for the Government to draw on a larger portion of the net investment returns from the reserves.

But there is also a risk that the Government's adherence to fiscal prudence will be tested by mounting political pressure to do and spend more.

Says Dr Gillian Koh, senior research fellow at the Institute of Policy Studies: "Will they have to do more? They will have to get a really good feel of what people need, people's expectations, and then reflect on how the State can strengthen social security sustainably. It is a balance between security, sustainability and, if it involves making citizens pay, affordability."

Indeed, PM Lee has often cited a speech by Dr Goh Keng Swee, one of Singapore's founding fathers, in which he observed that while welfare systems were immaculate in their conception, born of the best intentions, the outcomes were often quite different. Unexpected demands and unintended responses from the public often arose, causing programmes to grow beyond their initial intent.

The best way to avoid having to raise subsidies indefinitely to a growing pool of middle class, is to grow wages, says Mr Singh.

"In Singapore, it cannot be that we have First World infrastructure and not First World wages. If we count on the Government to pay for everything in the future, it will be risky," he says.

The question is whether a broad majority will back the new social compact, especially if it involves them paying more and receiving no immediate benefit from doing so.

For while the focus has been on the Government's enlarged role, the re-balancing also requires certain segments of the community to shoulder a larger burden. Medical insurance premiums, for example, are set to go up with the move to universal coverage. The plan is to front-load, which means the young and healthy will pay more.

And with the Government signalling higher taxes in future, the question is how much the well-off are willing to bear.

Veteran MP Charles Chong is hopeful that younger Singaporeans will take up the challenge: "It's a question of example. The Government has to show leadership. If they see the Government being tight-fisted, unwilling to help, some of them might say, 'then why should I help?'

"But if the Government says, 'look I'm taking the lead and we are calling on the better off to help as well', I think that's the best possible way to go forward. I'm generally optimistic that people will step up."

Mr S. Rajaratnam, a founding father of modern Singapore, said the country has to be a democracy of deeds and not words. Similarly, how this new social compact evolves and where it settles will be determined not by the words but by the deeds of the State, community and the individual.