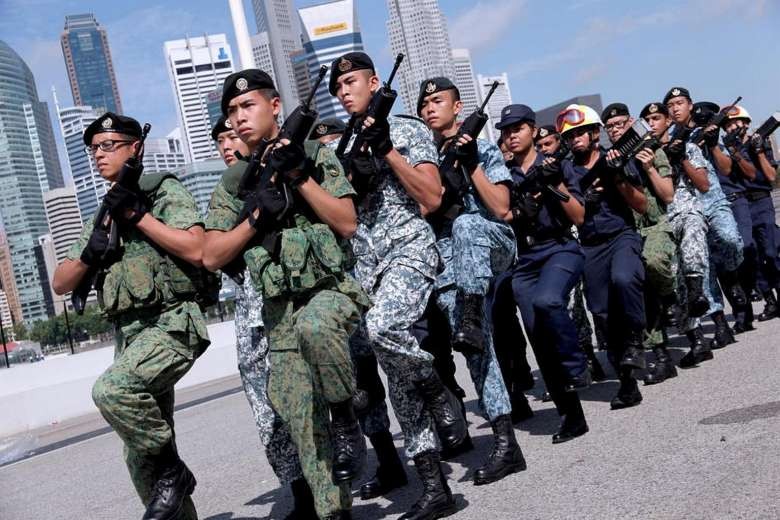 Tomorrow marks the date Singapore took a big step towards making national service a reality with the passage of the National Service (Amendment) Act in 1967.

Since then, more than one million Singaporeans have served NS in the Singapore Armed Forces as well as in the police and civil defence forces, as part of the Home Team.

As Singapore marks 50 years of NS, The Straits Times examines key milestones and the future of NS policy, and speaks to NSmen and five Home Team officers, each representing one of the past five decades.

When Mr Glenn Lim completed his full-time national service (NS) as a third sergeant in November 2006, he had more than eight months to wait before entering university.

He got busy by taking on two part-time jobs.

He also began student life early by taking a special class at the Singapore Management University, where he started school proper in August 2007 as an economics and accounting major.

"It eased my transition back into studies after more than two years of not hitting the books," says Mr Lim, 30, an insurance firm analyst.

But this industrious period would not have been possible without a key change to NS policy just before he entered the military.

In June 2004, the Government announced that NS duration would be cut to a maximum of two years.

The change affected those ranked corporal and above who had to serve 2½ years before the adjustment. It shortened their NS to the same two years served by those below the rank of corporal.

The reduction was phased in gradually throughout the rest of the year.

Mr Lim, who enlisted in the army in January 2005 and served in a signals company, was one of the first national servicemen to benefit fully from the reduction in NS duration.

"I was just lucky, I guess, but it spurred me to make full use of the time given to me," he says.

REASONS FOR THE CUT

One, the military was evolving over the next decade into a high-tech fighting force that would rely less on the number of boots on the ground, and more on the edge given by technology. Two, there was a projected surge of recruits due to more births starting from the 1988 Dragon Year till around 1997.

The first reason also allowed the Singapore Armed Forces (SAF) to cut reservist cycles from 13 to 10 - a move introduced in 2005 and implemented in 2006.

Since then, the SAF has kept up its pace of modernisation. For instance, it has put more of its infantry troops on wheels to improve their effectiveness in combat.

Today, the SAF is the best- equipped military in South-east Asia, according to this year's issue of Military Balance, an annual assessment of worldwide defence capabilities by the International Institute for Strategic Studies (IISS).

Defence analyst Ho Shu Huang from the S. Rajaratnam School of International Studies (RSIS) says one possible benefit from cutting the full-time NS stint is the streamlined deployment of NSFs.

Before the change, a common situation in a unit saw rank-and-file soldiers completing their NS a few months ahead of their commanders, leaving the sergeants and officers to linger around the camp.

"Above all, by having all NSFs serve two years, parity in NS was more apparent," he adds.

END OF THE SURGE

With the 10-year surge in enlistees ending two years ago, does this mean that NS duration will eventually have to go up again?

This question was already raised by MPs in Parliament in 2004 when Mr Teo announced the cut.

Responding then, he said Mindef had done a careful study and concluded the two-year NS duration could be sustained over the long term, even after the 10-year surge.

"What this 10-year surge provides us with is the ability to do this transformation and maintain our operational readiness at the same time," he said.

Mindef's manpower director Lee Chung Wei tells The Straits Times that while enlistment cohort numbers have begun to decline, efforts are afoot to develop the Next Generation SAF that will leverage new technologies and optimise the contribution of national servicemen.

"This serves to maintain the SAF's operational capabilities, even as we build up new ones such as cyber defence, to remain effective against future threats."

Mindef and SAF periodically review training methods and operational deployment requirements, he adds, "to keep the period of full-time NS not longer than what is necessary for our defence needs".

Second Defence Minister Ong Ye Kung, speaking during the debate on Mindef's budget on March 3, cited how combat engineers in the past lifted heavy loads to assemble a bridge but their counterparts today can do so with the push of a few buttons, thanks to new hardware that makes use of a hydraulic arm.

Dr Tim Huxley, executive director of IISS (Asia), says it has been 13 years since the NS duration cut and the SAF would have adjusted by making its training programmes fit a two-year timeframe.

He and Mr Ho point out that it would be politically challenging to increase NS duration. "It's very difficult to do a U-turn on such policies. It's neither necessary nor politically realistic," says Dr Huxley.

But will the SAF's success in embracing technology lead to a further cut in NS duration down the road?

Mr Lee says the two-year duration will be maintained "so that there is sufficient time to train our soldiers to be operationally proficient, and maintain an appropriate standing force for defence and peacetime contingency purposes".

With NS a core part of Singapore's identity, security and nation building, it also means there should be a minimum duration to instill these values in NSmen.

On Feb 7, when he launched the NS50 celebrations this year, Defence Minister Ng Eng Hen reiterated that a strong defence is always needed even in times of peace.

He cited countries such as Lithuania that had abolished conscription and found it hard to reinstate it when the need arose.

Dr Huxley points out that troops are also at their peak of military capability during full-time service so it makes sense to keep them in uniform for some time to maximise the investment in training them.

Moving forward, Dr Huxley says, it is likely that NS policy will focus on maximising the contribution of every serviceman by keeping him motivated. The Government is moving in the right direction, he adds, by allowing NSFs, who enlist from November this year, to indicate their preferences in vocations.

NSmen are also getting a leg up in their careers starting this year, with 23 SAF courses - including Basic Military Training (BMT) - coming under a national skills certification scheme recognised by employers.

But some, like staff nurse Huang Yingrui, have extended service.

Mr Huang, 28, enlisted in April 2010 as an army clerk as he had injured his elbow. Hewanted to serve in a combat role and got his wish when he started BMT in 2011.

He entered Officer Cadet School and extended service by nine months to complete his training.

Although he delayed his studies in NUS for a degree in nursing by a year, he says: "I always believe in the saying: 'If you serve NS, you regret for two years. But if you don't serve, you regret for life.'"